Officials say city is in no danger of losing credit rating. 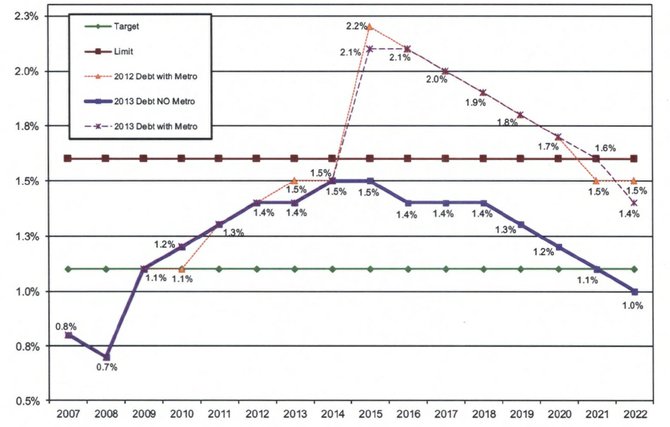 Debt service as a percent of real property assessed value. Courtesy of the Alexandria Budget and Fiscal Affairs Advisory Committee

Courtesy of the Alexandria Budget and Fiscal Affairs Advisory Committee

Debt service as a percent of real property assessed value.

Courtesy of the Alexandria Budget and Fiscal Affairs Advisory Committee

Debt service as a percent of general governmental expenditure.

Alexandria is on the verge of exceeding its own debt limit, and the city’s budget-advisory committee is warning that any additional borrowing could jeopardize the city’s credit rating.

Current projections show that the city will exceed its own debt limit from 2014 to 2020, a six-year period that Alexandria will be in the red as it finances construction of the Potomac Yard Metro station. City officials say that the credit-rating agencies in New York City have thoroughly examined the plan and given it the green light. Even though the limits have been violated, city leaders say, Alexandria is not at risk of losing its AAA/Aaa bond rating.

“Absolutely not,” said Deputy City Manager Mark Jinks. “Potomac Yard is a special exception. It’s kind of an add-on to the debt limit because of its unique circumstance in generating, over time, significant tax revenues for the city’s general fund.”

While the debt policy calculations include the burden of constructing a new Metro station, the projections don’t include other high-profile projects that could involve significant amounts of borrowing. That includes the waterfront plan, the Beauregard small-area plan, the full 10-year request from the school system, the Landmark/Van Dorn plan and the transportation master plan. If any borrowing is needed to finance any of those plans, the committee warns, Alexandria could put its credit rating at risk.

“We caution that additional borrowing to implement these additional projects would significantly deteriorate the city’s performance relative to its debt policy guidelines and adversely impact our AAA/Aaa bond rating,” the report concludes.

IN THE COMING YEARS, city officials say, new capital projects will be financed without borrowing money. As an example, Jinks pointed to the recently approved Beauregard small-area plan. City officials were able to negotiate $210 million worth of public benefits without borrowing a dime. Some of that came from developers, and some of that came from the city’s operating budget. None of it is financed through the debt. Jinks said that the waterfront plan has no debt spending, and if city leaders can replicate the model used in Beauregard and the waterfront, they’ll be able to finance the transportation master plan without borrowing money.

“It’s really a unique circumstance that was really not on the radar screen decades ago when the debt limit policies were established,” said Jinks. “We didn’t want to be in a position of amending the debt limits to accommodate Potomac Yard because that would have made it higher in perpetuity.”

That puts the city in a precarious position with any potential new capital spending. For example, the school system’s full out-year requests are not already funded through the capital-improvement plan. That means finding a way to pay for those new schools would mean potentially raising taxes or finding a way to persuade a developer to pay for them. Another option would be to defer them indefinitely until the Metro station is completed and the city is back in the green.

“Most conservative cities and counties like the business of worrying about their credit rating because they know it forces hard choices,” said Frank Shafroth, director of the Center for State and Local Government Leadership at George Mason University. “That’s what governing is about.”

MEMBERS OF THE BUDGET advisory committee recommend against any additional borrowing for any other projects that would cause the city’s debt to be further in excess of debt policy limits. For now, they also recommend against raising the debt limits, although some members of the advisory committee suggest that’s something the city may have to consider.

“There could be decision to realign the debt policy guidelines,” said Margaret Gullen, a member of the Budget and Fiscal Affairs Advisory Committee. “If that realignment occurs, then you may not in the future bump up against the target and the limit.”

But that decision could come with a risk. If the city decides to raise the debt limit rather than exceed it, the bond rating agencies may decide to change Alexandria’s bond rating. That would mean the city would have higher interest rates, a scenario that would jeopardize the funding plans that have already been calculated.

“That would be gambling,” said Shafroth. “And the fiscal folks in the City of Alexandria don’t seem to me to be gamblers.”