School to perform scene from ‘The Crucible’ at June 10 gala. 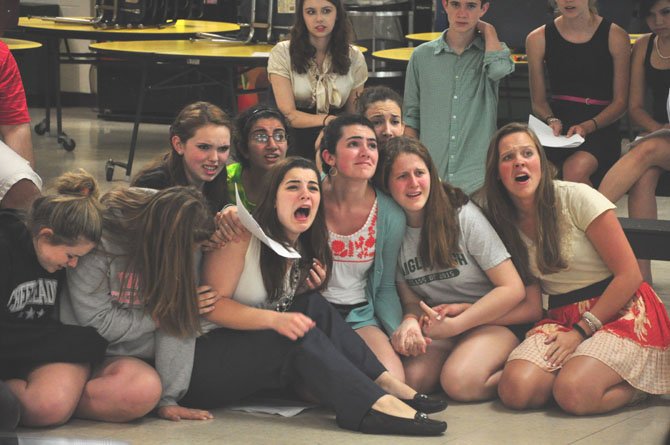 Students at Langley High School rehearse the courtroom scene from "The Crucible," for which they were nominated for five Cappies awards. Langley will perform a three-minute excerpt from the play at the June 10 Cappies gala. Photo by Alex McVeigh.

And the Nominees Are...

Langley High School received eight nominations for the Cappies gala, which will be held June 10 at the Kennedy Center. They are:

McLean — Langley High School received eight nominations for this year’s Cappies, including five for their performance of "The Crucible" earlier this year. They will perform a three-minute excerpt of the play at this year’s gala, to be held June 10 at the Kennedy Center.

The Cappies are a program where students review other high schools’ plays, and can be nominated for awards on stage and off, for their work reviewing plays.

THE PLAY was originally performed at Langley in a black box-style, meaning the audience shared the stage with the cast, creating an intimate environment where every facial expression and gesture was readily apparent. Now the students are learning to present the show in a more traditional way, due to the type of stage at the Kennedy Center.

"When we first decided to do the play in the black box style, we all had to adapt a little bit," said senior Brian Patterson. "Now we have to undo that, and adapt again."

Senior Kaitlin Hinojosa said there are many aspects they are working on translating to a bigger stage and an audience that’s farther away.

"We have to translate that intimacy that made the audience feel as though it was all happening right in front of them, and we’ve got to get that same feeling, even though we’re on a huge stage and the audience isn’t right there," she said.

The scene they will present is the courtroom scene where Abigail Williams, played by senior Lauren Fernandez, becomes hysterical, claiming she sees devilish visions and eventually leads to the conviction and hanging of several characters.

"We wanted to pick a scene that captures the essence of the play," said Patterson, who plays John Proctor. "It’s the climax of the play, so there’s a lot of emotion that you have to put into it."

Fernandez said the lighting of the play as they originally performed it "worked really, well, it really made it into an intense experience, and that’s what we have to capture." 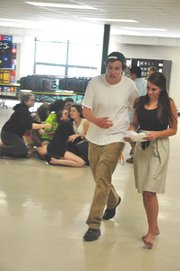 John Proctor (played by senior Brian Patterson) leads Mary Warren (played by senior Caroline Callahan) through the hectic courtroom scene during a rehearsal for Langley High School's "The Crucible," which they will perform at the Cappies Gala June 10.

In addition to changing the way the scene is presented, the cast had to whittle it down to only three minutes, and during the next few weeks of rehearsal, they will be cutting down lines where they can.

SOME SENIORS attended the Cappies gala two years ago as sophomores.

"We’ve been together a while, through a lot of shows," Hinojosa said. "So this is a really great way to wrap up our high school theater experience."

Senior Taylor Goodson, who was nominated for Lead Actress in a Play, performed as a sophomore, says it’s amazing to think about.

"It’s pretty rare for most people to perform on the Kennedy Center Stage once, to be invited back for a second time is a huge honor," she said.

Senior Victoria Tovig, who was nominated for the Returning Critic award and performed in "The Crucible," said her experiences critiquing others’ plays has helped her onstage as well.

"You get a totally different perspective seeing it from the outside, you see the flaws, the good parts, everything," she said. "It’s amazing to get so many perspectives."

Sophomore Jamie Joeyen-Waldorf was nominated as a Rising Critic. She credited her mentors with helping evolve her critical style.

"It’s impossible not to learn something, everyone has different writing styles, different things they look at," she said. "Over time I think I‘ve gotten better at describing what I‘m seeing on stage."

Patterson, who also serves as a critic, says Cappies gives him a chance to see shows he might not otherwise see.

"It’s fun to look at your schedule and see things like ‘The Wizard of Oz,’ or something you’ve never heard of, and know you’re going to get a chance to see it," he said.