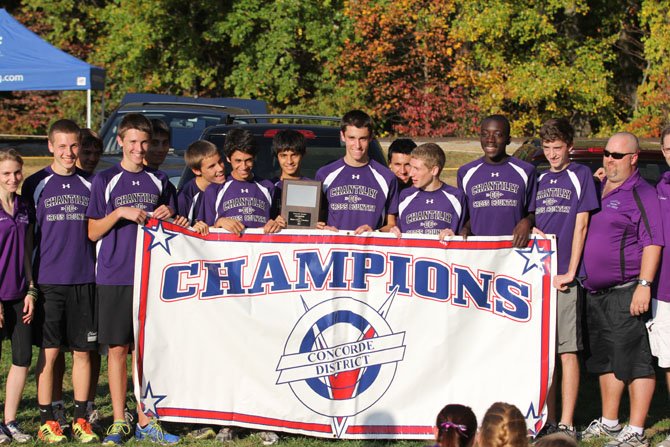 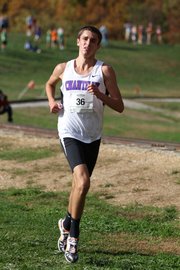 Fairfax Station — The Chantilly boys’ cross country team left its mark in the record books on Oct. 24 as the Chargers enter a promising postseason.

Chantilly won the first Concorde District championship in program history as each of the Chargers’ five point-scoring runners finished in the top seven during a warm Wednesday at Burke Lake Park. Chantilly harriers placed first, second, fourth, fifth and seventh, leading to a team score of 19, the lowest in the 19-year history of the Concorde District championships. Oakton held the boys’ previous low of 23, set in 2007 during a streak of five consecutive team titles.

“They were prepared to bring their best,” Chantilly head coach Matt Gilchrist said, “and I think we saw that today.”

Chantilly’s Sean McGorty won his third consecutive individual district championship, recording a personal-best time of 14 minutes, 38 seconds. McGorty’s time was the second-fastest in the history of the Concorde District championships and tied for sixth-best in the history of the Burke Lake Park course. Annandale’s Ahmed Bile, a two-time state champion, also ran 14:38 at Burke Lake Park during the 2011 Northern Region championships. South Lakes graduate Alan Webb, who holds the United States record in the mile, holds the course record and Concorde championships record of 13:57, set on Oct. 25, 1999.

“It’s so much better being able to finish, grab water, turn around and see four of my guys coming in really close to me,” McGorty said. “That was awesome. It made it so much better. It made the moment a lot more special to me.”

While McGorty was pleased with the Chargers’ performance, saying his teammates finished “really close” to him would be on the generous side. 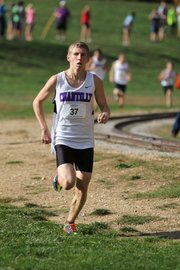 “It’s really great to have this momentum going into regionals to show ourselves that we can be one of the best teams,” Miller said. “… We have worked extremely hard this whole season. It’s paying off big. We’re better than we thought we would be and that’s pretty exciting. These guys always surprise me with how good they are each race. I didn’t think we would be this good.”

ROBINSON FINISHED runner-up in the team standings with a score of 64, followed by Westfield (92) and Oakton (95). The top four teams and top 15 individuals from each district qualify for regionals, which were re-scheduled for Friday, Nov. 2 at Burke Lake Park.

“The [Chantilly] boys know that they have bullseye on their back,” Gilchrist said. “We respect that and I think we expect everyone to bring their best next week and we hope we can continue for a few more weeks. The goals haven’t been met, but this is very satisfying.”

The Centreville boys’ team placed sixth with a score of 141. Bobby Dunn qualified for regionals as an individual, placing 14th with a time of 16:09.

IN GIRLS’ ACTION, Chantilly (72) and Centreville (100) qualified for regionals by finishing third and fourth in the district team standings, respectively. Oakton won the event with a score of 40 and Robinson (45) finished runner-up.

Westfield finished fifth out of six teams with a score of 117. The Bulldogs’ Sara Freix (18:34) qualified for regionals with a sixth-place finish.