Each of Generals’ seven harriers place in top 11. 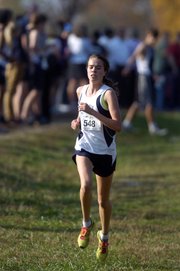 Fairfax Station — At first glance, it would have been easy to mistake the award ceremony after the National District girls’ cross country championship race for a Washington-Lee team photo shoot.

Each of W-L’s seven harriers finished in the top 15, earning all-district honors, as the Generals cruised to their third consecutive team championship at the district meet on Oct. 25 at Burke Lake Park.

W-L finished with a score of 23, followed by runner-up Edison with a total of 71. Yorktown (93) and Falls Church (100) also earned regional berths. While only the top five finishers count toward a team’s score, having seven Generals finish in the top 11 was a testament to W-L’s depth. W-L assistant coach Laura Przydzial said the team expected to do well at the district level and has its sights set on qualifying for the state meet.

“It’s always nice to win, of course,” she said, “but today was less [about] proving that and [more] for each of them individually to have a great race to get them ready for next week because next week is going to be the challenge.”

The Northern Region championship meet was re-scheduled for Friday, Nov. 2 at Burke Lake Park. W-L would need a top-four finish to qualify for states.

“Sarah Angell had the race of the year,” Przydzial said. “She’s been running mediocre for her, as a whole, but this is one of her best races. It’s her lifetime PR here by 30 seconds.”

“Getting all our top girls in the top [11 at districts], I think that really shows that we can [qualify for states], and if everyone runs like they did today or better, then I think it’s definitely possible.”

Last year’s W-L title team was led by individual champion Isabel Amend. With Amend having graduated, Przydzial said Angell has stepped into the role of No. 1 runner for W-L. She also said the Generals’ depth has improved.

“[Angell] is our alpha [runner],” Przydzial said, “but the rest of the team isn’t as far behind [her]. Today, she pretty much secured her role in that.”

Angell said she “just wanted to keep within sight of Jennifer Flack.” 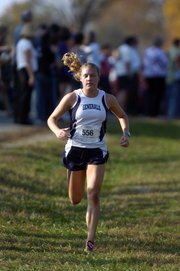 Along with Angell’s strong performance, Przydzial said Macewen showed improvement. Usually W-L’s No. 7 or No. 8, Macewen finished as the Generals’ No. 3 at districts, with a PR of around 30 seconds.

“The fact that we can all run together,” Macewen said about her teammates, “it really helped me stick with them for the first mile and then just motivated me to keep going throughout the whole thing.”

Next up for W-L is the regional meet. Is qualifying for states a reasonable goal?

“Getting all our top girls in the top [11], I think that really shows that we can do it,” Macewen said, “and if everyone runs like they did today or better, then I think it’s definitely possible.”