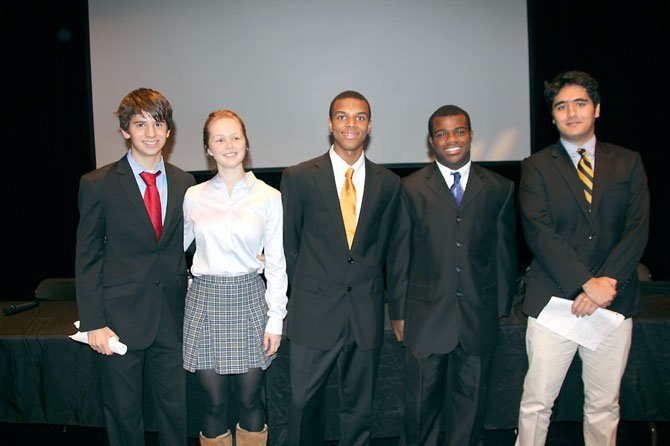 Students and staff at the Bullis School voted on Tuesday, Nov. 6 for the presidential candidate of their choice.

The entire student body and staff at the Bullis School attended a Town Hall Debate on Monday, Nov. 5 — and voted — just as their parents and most of the over-18’s in the U.S. All students and staff were required to register in order to vote. Registration duties were handled by the Bullis 5th grade, while students from the other Lower School classes participated in making and hanging posters to encourage everyone to register. Middle School students helped the candidates with publicity and signage, and the Upper School provided candidates and advisory committees for each candidate. Faculty members also served as candidate advisors.

Each of the student-presidential contenders laid out the philosophy of their candidate and party. Dyer (Obama) said, “I want to return to the tax code system of President Clinton and re-establish the surplus that was attained during his administration. We can best help the poor in our country by providing support for those basic needs that are so costly – like health care and jobs training. We must help 100 percent of America and not ignore 47 percent. People who have more should help more.”

Salmasi (Johnson) of the Libertarian Party said, “We must pull all of our troops out of Afghanistan and avoid unwinnable wars to regain control of our economy and focus on our own issues here at home. We have to put people back to work — and cannot ignore 47 percent of our country.” He also explained in an earlier interview that Libertarians advocate cutting military spending overseas and providing more protection for U.S. borders. “They champion the constitution,” he said.

Vaughn (Stein) of the Green Party said, “Stopping the flow of arms in Syria should be our number one priority in that crisis-stricken country.” She also advocated for a moratorium on foreclosures to give borrowers more time to regain their financial stability and limit the growing homelessness among those struggling to keep their homes. “I would like to institute a carbon tax nationwide to encourage research into new energies. New sources of energy will bring new jobs for America. We must also address tax pollution and eliminate loopholes for the super-rich and reduce the tax burden for the poor.” Vaughn found participating in the debate to be quite exciting and educational, since she is just learning about American government and politics.

Sullivan (Romney) stressed that “We must bring jobs back to America, rather than allowing so many products we use right here to be imported from overseas. We must absolutely limit federal spending, while reaching out to the underprivileged.” He also stated that, “Education must become more accessible. I will support community colleges and financial aid programs. In answer to the Syria question, he said, “We must help the revolutionaries in Syria to fight the dictatorship currently in power.” Sullivan also emphasized, “I am not a monster and have strived to avoid negative campaigning. I care about all Americans.”

The students and staff listened and then had to make their decisions of which candidate to vote for. In the process, they learned about the political process, political parties, the candidates, and the importance of voting. The results of the election will be announced as soon as all the votes are in.