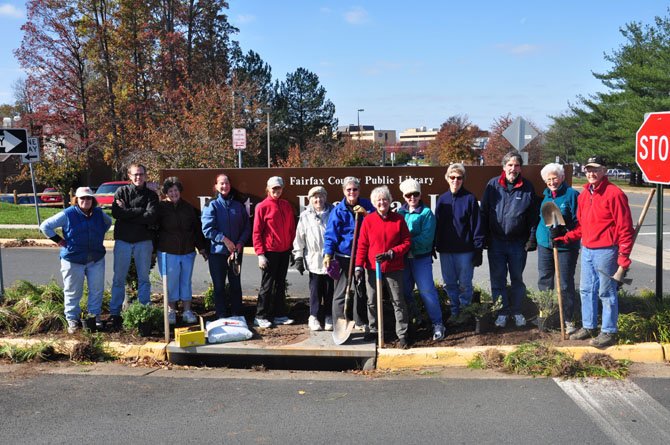 Members of the Reston Garden Club during their “Big Dig” beautification project at the Reston Regional Library Monday, Nov. 5. Photo by Alex McVeigh.

When members of the Reston Garden Club planned their “Big Dig” project at the Reston Regional Library, one of their main goals was to beautify the traffic islands in the parking lot. By adding dozens of plants to previously barren patches of dirt Monday, Nov. 5, the club achieved several goals. 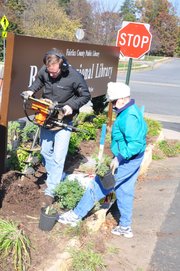 Anthony Piselli of Hidden Lane Landscaping and Barbara Pelzner of the Reston Garden Club work on the bed near the Reston Regional Library sign Monday, Nov. 5.

“This is our annual beautification project, where we provide the labor to add to the landscape around our local library,” said club member Julie Bond. “

The Friends of the Reston Regional Library provided the funding for the plants, and Hidden Lane Landscaping, a Herndon-based residential garden design firm, performed much of the work.

“Our goal was to coordinate with the club to put in plants that are as care-free as possible. They don’t need annual fertilizing and won’t need to be trimmed much,” said Anthony Piselli of Hidden Lane Landscaping. “They’ll also stop a lot of the erosion that happened with just the dirt, after it rained, the parking lot would be a mess with all the washed out dirt.”

Piselli said they wanted to give the soil beds next to the sign on Bowman Towne Drive “curb appeal,” so they used a variety of nepetas and nandinas, as well as two transplanted hinoki cypresses and several day lilies.

“They did a really good job selecting the plants at the entrance, it’s a nice variety that makes the sign pop,” said Marilyn Calhoun of Reston. “It looks cleaner, less cluttered, and it creates a better first impression for the library, even for people just passing by.”

The large bed adjacent to the entrance already had a large tree, and members added dozens of liriope, a low-grass like flowering plant. Piselli used a power auger to create holes, then club members could add the plants.

“I think the plants look great, much better than just a dull pile of dirt,” said Edwin Esteban of Reston, who visited the library while the project was underway. “

In addition to the beds, club members planted a memorial tree next to the library in memory of a member’s husband who recently passed away.

The Reston Garden Club was founded in 1970, and hosts monthly meetings to connect members with gardening resources and education. They host several projects per year, including beautification of the Reston library, and the creation of holiday greens displays for the Cameron Glen Care Center.

More information can be found at www.therestongardenclub.org.