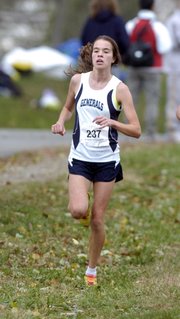 Washington-Lee’s Sarah Angell qualified for states with an 11th-place finish at the Northern Region cross country championships on Nov. 3 at Burke Lake Park.

Fairfax Station — The Washington-Lee girls’ and boys’ cross country teams fell short of qualifying for states, but each team will send its top harrier to Great Meadows.

W-L’s Sarah Angell finished 11th in the girls’ race and Haileye Demsie took 15th in the boys’ competition to advance to the state meet, which is scheduled for Saturday, Nov. 10 at Great Meadow. The top four teams and top 15 individuals qualify for states.

"Sarah ran the best race of her season yet at regionals," W-L assistant coach Laura Przydzial wrote in an email. "She is in shape and has gained her confidence back which showed on Friday. She beat her time on that course at regionals last year by almost a minute, so it is hard to complain about much. She is incredibly talented. If she puts in the summer of training that she should, she should have an amazing senior year."

"All of our top seven are returning next year," Przydzial wrote. "They really started to connect as a team this year, so next year should just mesh well from the beginning. Many of our girls ran times that they didn't even think were possible a month or so ago. They started off as the underdogs and really put W-L on the radar in the region. If they put in a good summer of training together, there is no reason why they should not be at the state meet next year."

In the boys’ race, Demsie finished with a time of 15:46 and grabbed the final state berth. He was seven seconds ahead of the 16th-place finisher.

"HD's race was stressful to watch as a coach, but he pulled it off beautifully," Przydzial wrote. "He was about 30th at the halfway point but had a great second half of his race. Every race is another learning experience for him. He is finally gaining the confidence in his racing that he needs."

"[The] boys performed better overall than I ever thought they would when the season started," Przydzial wrote. "They all showed much improvement."

Yorktown’s top finisher was Kristin Herbert, who finished 77th with a time of 19:56.

Yorktown’s top finisher was Jackson Cochran, who took 68th with a time of 16:38.