Gearing Up for Turkey Trots
Votes

Gearing Up for Turkey Trots

Fitness experts offer tips for getting in shape. 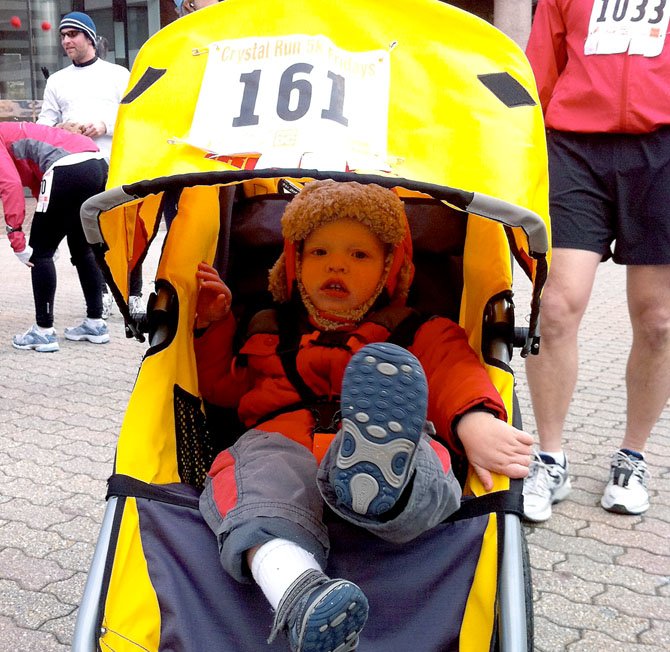 Nina Elliot is planning to run in the Arlington Turkey Trot with her family, including son Caleb. Local fitness experts say it might not be too late to get in shape for Thanksgiving Day races. Photo courtesy of Nina Elliot

Before the bird is carved on Turkey Day, Arlington resident Nina Elliot will be hitting the pavement. The mother of two is running in the 7th Annual Arlington Turkey Trot.

“I'm running with my family. I can't wait,” said Elliot, who is a personal trainer. She is running with her husband, Christian Elliot, and children Naomi, 5 and Caleb, 2. “The children will both be strapped in a double stroller. There is no better way to savor the fall weather and invigorate your senses than exercising in the fresh air.”

For some, Thanksgiving Day turkey trots are as much of a holiday tradition as football games, cranberry sauce and stuffing. For those considering a Thanksgiving Day race, local fitness experts say it might not be too late to get in shape.

“Most turkey trots are 5K,” said Michelle Walters-Edwards, Ph.D., chair and associate professor of health and human performance at Marymount University in Arlington. “Start preparing now. If you are not used to jogging, begin a walking program and gradually introduce periods of jogging as you progress. Aim to work out three or four days per week.” 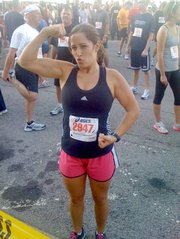 Nina Elliot is planning to run in the Arlington Turkey Trot with her family.

WHEN DEVELOPING a training program, consider one’s physical ability. “The person's current fitness level and goals for the race are the most important two factors to consider," said Joel Martin, Ph.D., an assistant professor of kinesiology at George Mason University in Fairfax.

Before beginning a training program, Walters-Edwards suggests making sure one is healthy enough to run. “If you have a pre-existing condition—like diabetes, heart disease or high blood pressure—check with your doctor to make sure that it is safe for you to participate in this type of event.”

For new runners, start off slowly. “Increase the time that you can jog without stopping each time you work out, even if it is one extra marker, such as time or something along your route like a lamp-post, tree or street sign,” said Walters-Edwards.

“I would recommend that a newer runner plan on running three days a week for the next two weeks—maybe Monday, Wednesday and Friday,” Martin said. Monday and Friday should be longer runs at a pace slightly slower than their goal for the 5K. On Wednesday, they should do some interval training or hill running to build up strength. There is no need to run distances longer than that of their race.”

For those who are new to running, experts advise training slowly and carefully. “If they have not been doing any running, or very little, then they will really want to start off slow,” said Martin. “Someone who has done virtually no running in the past couple months, who then decides to go out and run five miles tomorrow, will not be doing themselves any favors. They very well may injure themselves or become quite sore and not be able to train again for three or four days.”

FOR EXPERIENCED RUNNERS, however, Martin suggests adding another day of running or “some sort of cross-training [like] cycling, swimming [or] rowing one or two times per week. The week of the race, they should cut back on their training. This will allow their bodies to recover from the previous two weeks and their energy stores in their body to replenish themselves so they are at optimal levels for the race. Early in the week [of the race], they may want to do a longer run at a medium-to-slower pace and then a day or two before the race do a slow run for a mile or two,” he said.

On the day of the race, Martin advises runners to eat approximately two hours before the event begins. “Ideally this should be a carbohydrate. Avoid fats and proteins,” he said, recommending a bagel with peanut butter. “Also, they should make sure they are adequately hydrated, but not over hydrated.”

EXPERTS SAY proper running shoes are key as well: “Make sure you have safe and supportive footwear that will provide cushioning for the stress of running to your lower body joints like knees, hips and lower back,” said Walters-Edwards.

“If they are planning on buying new shoes, they should buy them now and train in them so that they are broken in for the race,” Martin said.

Walters-Edwards encourages runners to keep up the fitness program even after the race ends: “Don't just jog the turkey trot, keep the cardio exercise going all year long. Join a walking group or jogging group or switch up the cardio to include other activities like cycling, swimming or an aerobics-based class.”