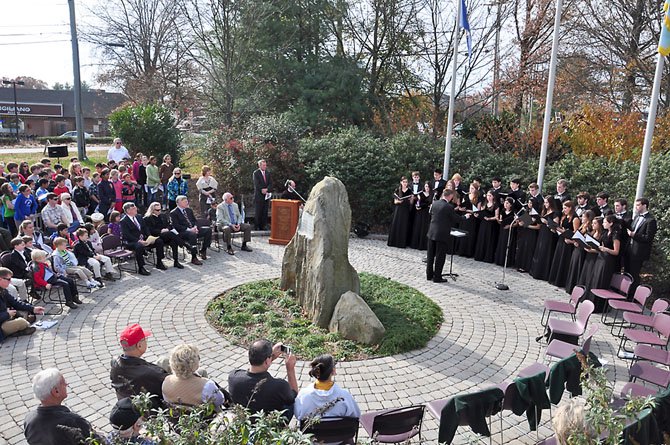 The Friends of the Great Falls Freedom Memorial hosts their annual Veterans Day ceremony at the memorial Monday, Nov. 12. Photo by Alex McVeigh. 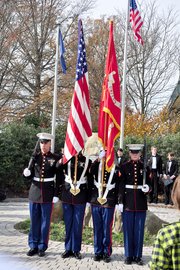 "It’s important to know why this day is commemorated in this country. In 1918, on the eleventh hour of the eleventh day of the eleventh month, a cease fire was declared between the Allied countries and Germany," said Andy Wilson, vice president of the Friends of the Great Falls Freedom Memorial. "Armistice Day became Veterans Day in 1954 after congress went to President Eisenhower and said we should honor all of our veterans, especially those from World War II and Korea."

Wilson was one of almost a dozen veterans in attendance at the ceremony. An Army Ranger officer, Wilson was severely wounded in Vietnam and spent a year rehabilitating at Walter Reed Hospital, where he met his wife Nancy.

KEYNOTE SPEAKER James Roberts pointed to Wilson’s example as one of hundreds that have inspired him throughout his life. Roberts served in the Navy during Vietnam as a weapons officer, and founded the American Veterans Center in 1995. The center supports a wide range of programs for veterans, including organizing the annual National Memorial Day Parade.

Roberts named other veterans who he has met over the course of his work, and said he was inspired by every one of them.

"I think of Jack Lucas, who at age 15, lied about his age to join the Marine Corps, and a year later found himself in heavy fighting in the bloodbath that was Iwo Jima. When a Japanese grenade landed in the midst of his platoon, young Jack dived on it, taking the blast and saving his platoon mates," he said. "Jack was given up for dead until a medic saw one of his fingers twitching. He was horribly wounded and survived months of surgery before returning to civilian life. When he did, he honored the promise he made to his mother to finish high school."

Roberts urged the people in attendance to make sure their children learned about things like good values, responsibility and hard work, in order to protect what the military has done for this country over its history.

"If you ask many people what the main responsibility of the United States Military is, they would probably say ‘keeping us safe.’ And there’s something to that. But when you get down to it, I think the major responsibility of the United States military is to keep us free," he said. "And they’ve done that job for over 200 years. But freedom can be lost. Ronald Reagan famously said ‘the loss of freedom is but one generation away.’ So we here at home need to do our part."

Members of the U.S. Marine Corps Color Guard participated in the event for the first time, posting and retiring the colors before the start of the event. The Langley Madrigals also performed several patriotic songs, while the students from the Village Green Day School led the audience in the Pledge of Allegiance.

"This is what the Great Falls Freedom Memorial is all about, being inspired by the Marine Corps Color Guard, feeling the pride coursing through as we’re inspired by the patriotic singing of the Madrigals, seeing the young children here," Wilson said.

MANY LOCAL RESIDENTS attend the ceremony every year, which, in addition to the Memorial Day and 9/11 remembrances, is an annual tradition at the memorial.

"It gets better and more poignant every year," said Gordon Howard of Great Falls. "It’s amazing how they are able to find speakers every year who have interesting experiences and thoughts, and the participation of the students, who are sharing their morning with the older residents and veterans, make it a true community event."