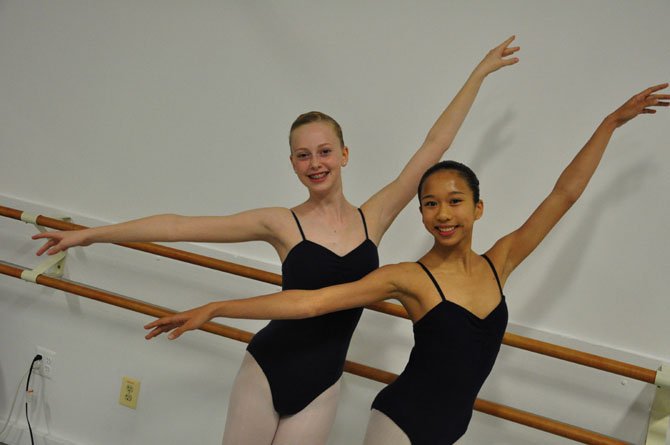 From left, Lily Campbell and Ashley Tern, who will play Clara in the Classical Ballet Theatre’s upcoming production of “The Nutcracker.” Photo by Alex McVeigh.

When they take the stage for the Classical Ballet Theatre’s annual performance of “The Nutcracker,” 13-year-olds Ashley Tern and Lily Campbell will take their first lead roles in a combined 21 years of dance.

The two will play the role of Clara during the CBT’s performances, and as close friends off the dance floor, they’ve been assisting each other for the last several weeks.

“We exchange corrections and ideas to each other a lot, on the phone, with texts and with e-mails,” said Tern, an eighth grader at Rachel Carson Middle School. “I’m so excited to play this part, I’ve been part of this production as a little doll or in the corps de ballet, but this is my first lead role.”

This will be the ninth performance of “The Nutcracker” for Tern, who is an 8th grader at Rachel Carson Middle School. 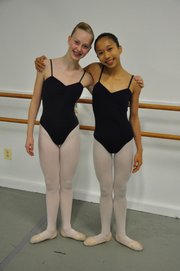 From left, Lily Campbell and Ashley Tern, who will play the lead role of Clara in the Classical Ballet Theatre’s production of “The Nutcracker.”

“The role is definitely fun because you have to act as well as have great technique,” Tern said.

Campbell, an eighth grader at Thoreau Middle School, has been with the Classical Ballet Theatre for the past 10 years, and has taken part in the theater’s summer intensives, as well as a two-week program in New York in 2010 and a five-week intensive course in Chicago last summer.

“It’s been a lot of work, as I expected, and I’ve learned a lot of things about partnering with another dancer and performing as a soloist,” Campbell said. “I’m really looking forward to my solo, in the scene where the Christmas Tree grows.”

Campbell said being onstage for an entire production takes its toll physically.

“It’s a lot to push through, especially at the end, when you’re really tired, you’ve been on point the whole play and your feet are hurting,” she said. “The fight scene is especially tough, because it’s a lot of jumping around. But it’s encouraging when you start to get it, to know that training since September has been paying off.”

The two have also served as stage managers for each other, helping keep water bottles full and assisting with props.

The Classical Ballet Theatre is a not-for-profit based in Herndon that provides dance education, performance and outreach opportunities to dancers.

Their performance of “The Nutcracker” will take place Saturday, Nov. 24 at 2 and 7 p.m. and Sunday, Nov. 25 at 2 p.m. All shows will take place at the Ernst Cultural Community Center Theater at the Northern Virginia Community College Annandale Campus, 8333 Little River Turnpike in Annandale.

Tickets are $25 for adults, $20 for seniors, students and children and $18 for Boy Scouts, Girl Scouts and military families. More information is available at www.cbtnva.org/nutcracker.