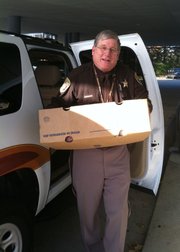 Wright led a month-long drive among staff who donated food, such as canned tuna and meat, jars of peanut butter, boxes of pancake mix, and breakfast cereals, as well as cash that was used to purchase more food. Then Wright delivered several boxes of food to Beth Campbell, a volunteer with ALIVE!’s food program that aids almost 1,000 families in need who are referred by local social service agencies and member congregations. ALIVE! (ALexandrians InVolved Ecumenically) is a 501(c)3 nonprofit organization of volunteers from more than 40 religious congregations and the community working together to help those in need in Alexandria.

On Tuesday, Nov. 20, Chief Deputy Tony DiCesare was scheduled to pick up eight additional dinners at Lockheed Martin in Manassas and deliver them to Hopkins House. Both IBM and Lockheed Martin provide the funds to purchase the dinners and their employees arrange for the food purchases and meal coordination.