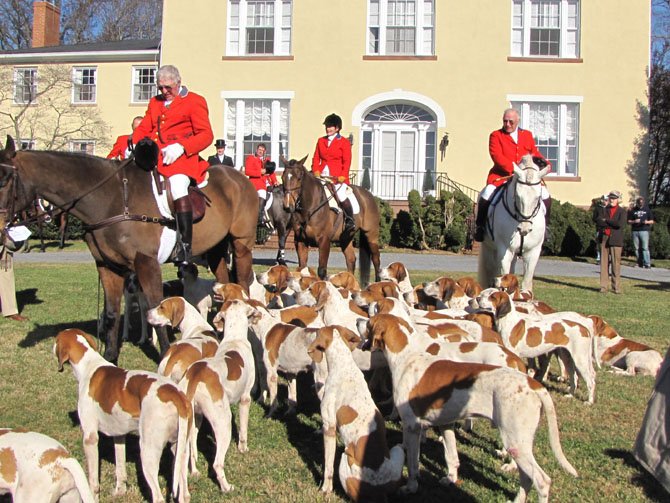 Potomac — You can’t keep a good huntsman down, but you sure can keep him off his horse. Larry Pitts, Potomac Hunt huntsman for over 30 years, was grounded on the Hunt’s annual Thanksgiving Day gathering at Austin Kiplinger’s historic Montevideo home. For the first time since 1980 Pitts followed hounds via automobile, a.k.a. hill topping. 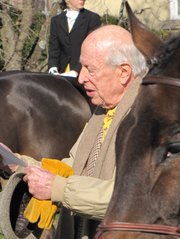 This was not by choice, but by accident. Two weeks earlier, during a hunt meet at the home of jtMFH Beverley Bosselmann, Pitts’ horse slipped on a newly finished driveway. “When I felt him slipping I was going to roll off of his back, but he rolled first. He fell to the right like a ton of bricks and landed on my right leg,” he said, adding, “It hurt all over.”

It wasn’t until post surgery several days later, while still in Suburban Hospital, it was discovered his foot also had a broken bone.

“We were deliberately late for the Thanksgiving Day Meet. I didn’t want to interfere,” he reflected. He was concerned if he showed up at the Meet hounds would leave the pack to come visit. “If they had seen me they would have come right to me,” he explained.

Veteran huntsman of 35 years, and a good friend of Pitts, Allen Forney, pitched right in to help. “Allen is really good at it. He is very conservative,” Pitts remarked. It was to Forney he said, while still lying on the ground and waiting for the ambulance on the day of his accident, “Take good care of my hounds.”

“There he was on the ground, trying to sit up and couldn’t. I had his head in my lap and tears in my eyes when he said that,” jtMFH Vicki Crawford recalled. It was obvious his concern was more for the wellbeing of his pack than for himself.

Thanksgiving Day, Nov. 22, was a beautiful day for horses, hounds, riders and foxes. “We cast hounds behind Montevideo, drawing through the woods, running parallel to Partnership Road. Potomac Hunt’s hounds ran for a half hour non stop, eventually crossing Seneca Creek. We had foxes going everywhere,” Forney exclaimed, adding, “The hounds spoke to me pretty good and hunted very well.”

The customary Thanksgiving Day Meet at Kiplinger’s is always a festive occasion with the Blessing of the Hounds and prayers for all. Austin Kiplinger was pressed into service to administer the blessing this year when the appointed minister was delayed. Referring to the unseasonably warm, late fall weather, he added, “The Lord made his face shine on us.” More than 60 hunters astride left Montevideo when the huntsman blew “Gone Away” and many were still in the saddle four hours later. “Other than a few checks, hounds hunted all the time we were out. It was just one of those days when everything fell into place,” the huntsman concluded.

Sighting a friend at the Thanksgiving Day Potomac Hunt Meet, Vicki Crawford jtMFH waves a hello while astride her horse.

There was another agenda on the program at Montevideo: Thanksgiving dinner. “We invited 25 guests,” Knight Kiplinger said. His wife, Ann, did most of the cooking, but everyone brought something, too. Austin’s grandson, and Knight’s son, Brigham, and his wife Eliza, were among those there. “They were married Sept. 29 in the back field in front of the family school house. It was perfect. They are both school teachers,” Knight said.

He also very happily advised that his and Ann’s daughter, Daphne, is recently engaged to Dave Steadman, member of the development staff at St. Albans School. “They met while singing in the Washington Chorus where Ann and I met in 1979. History is repeating itself,” Knight concluded.

There was a great deal of history repeating itself on this day. While hunters rode off for a day in the fields and woods, many hill toppers headed toward home or wherever there may be a Thanksgiving celebration. This included the Kiplinger’s new neighbors, Mary and Ted Kingsley, who recently purchased the Partnership Road historic home where the Joseph Lorenzs lived for many years.

Allen Forney, the substitute huntsman of the day, and his wife, Jeanne, were a tad late getting to their home after getting horses and hounds fed and settled. “It was late, but she fixed me a great big juicy steak for dinner.” So much for tradition. He didn’t mention pumpkin pie.