Office of Community Revitalization plans for redevelopment around Lake Anne. 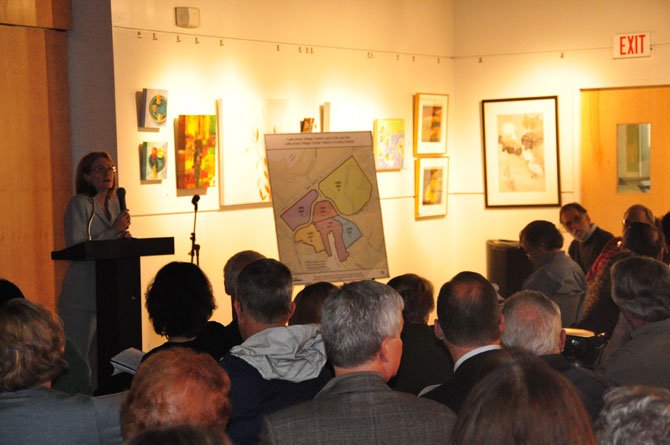 The Fairfax County Office of Community Revitalization hosts a public meeting on the future of Lake Anne Monday, Oct. 1 at the Reston Community Center Lake Anne. Photo by Alex McVeigh.

The Fairfax County Office of Community Revitalization released the latest timetable for the redevelopment of the Crescent Apartments near the Lake Anne Village Center. Through the first quarter of 2013, proposals will be reviewed for the nearby Crescent Apartments, followed by a six month process where the development partner will be selected.

“The request for proposal is to redevelop the Crescent Property with the goal of revitalizing the entire property,” said Elizabeth Hagg, deputy director of the OCR. “It could encompass a consolidated option, which is more parcels, more land units, and we certainly hope it will. That is the preferred option. However, there is the possibility that it may not be possible to consolidate.”

While details on the proposals cannot be revealed, Bridget Hill, senior program manager with the OCR said that “multiple proposals” have already been received.

Staff from the County’s housing department said that the RFP required that all proposals address the plans for relocating current residents.

“In the RFP we asked the developers to give us temporary and permanent placing of current residents, that’s very important to housing,” said Nicole Wickliffe of the housing department. “When they submit the proposals, that needs to be in there.”

According to the County, the request encouraged developers to assemble additional properties within the Lake Anne Village Center.

The County currently has 18 months planned for Fairfax County Planning Commission and Board of Supervisors, which will go until the beginning of 2015.

But the plan must also be approved by the Reston Design Review Board, and DRB Vice Chair Richard Newlon said there didn’t seem to be much chance of it going through that quickly.

“It took about three and a half years for JBG to get the Fairways development through the DRB, so planning for 18 months on a project this size seems to be wishful thinking,” he said.

Site plan and building plan approvals are currently scheduled to take about a year, through mid-2016, which is when construction is planned to commence.

More information can be found at HYPERLINK http://www.fcrevit.org/lakeanne/CrescentRFP.htm.