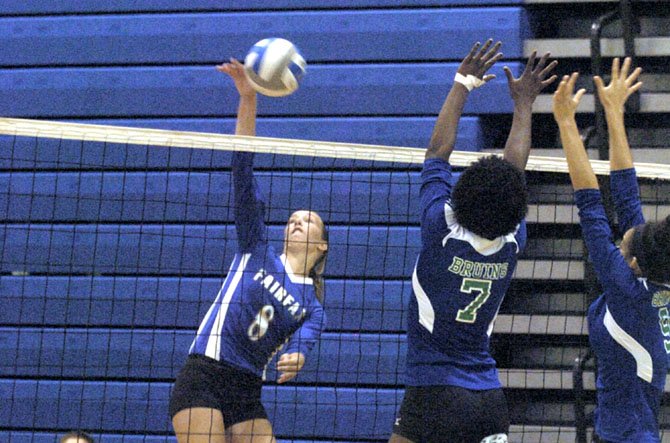 While no team other than the Bulldogs or Saxons has finished in the district’s top two since Madison in 2005, a productive senior class might give the 2012 Fairfax Rebels a chance to realign the Liberty District power structure.

With six seniors on the roster, Fairfax is 15-4 and ranked No. 4 in the latest Northern Region Volleyball Coache Association top 10 poll, behind Stone Bridge, Woodson and T.C. Williams. The Rebels won their district opener against McLean, 3-2, on Sept. 18 and will close the regular season with six consecutive district matches. 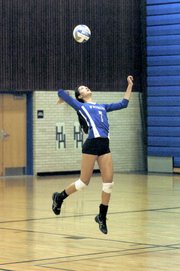 Fairfax won Liberty District championships in 2000 and 2002. The Rebels moved to the Concorde District in 2005 and returned to the Liberty in 2009 in the midst of Stone Bridge and Langley’s dominance. Fairfax senior outside hitter Megan McKenzie said the Rebels have what it takes to compete with the Bulldogs and Saxons.

“This is the year and we’re going to do it,” McKenzie said after the Hayfield Invitational on Sept. 29. “Our driving force is going to states this year because we have six seniors. Once we leave—I’m not going to say that the program is going to be over—but…this is the year to do it if it’s going to happen.”

Are the Rebels focused on those dates? Yes and no, according to first-year Fairfax head coach Tyler Freiheit, who was an assistant with the program for six seasons.

“Absolutely,” he said. “Langley, not so much. They dropped a match to South Lakes this year. The focus is more on Stone Bridge since they’re undefeated, but we’re trying not to get caught up in the hype.”

Fairfax competed in the Hayfield Invitational on Sept. 29. The Rebels breezed through pool play, beating Forest Park, West Potomac and Mount Vernon. After beating Lee in the semifinals, the Rebels once again faced Forest Park for the tournament title. After winning the first set, 25-18, Fairfax dropped the next two (25-19, 15-9) and finished tournament runner-up. The loss snapped an 11-match winning streak for the Rebels.

Freiheit said the experience of playing five matches in one day can help the Rebels down the road.

“It’s the first big test that we’ve been up [against],” he said. “To keep that momentum [after winning the opening set in the tournament final], to keep that energy up for the next two sets, it was new to them. It’s a long tournament and they’re tired. It’s going to take more than them just being physically ready—it’s all mental.”

McKenzie, who is listed at six-foot-one, leads Fairfax with 217 kills. Five-foot-11 senior outside hitter Nora Elliott has 131 kills. Six-foot senior middle blocker Arisa Chavez has 102 blocks and senior defensive specialist Geneva Tomajko has 207 digs. Outside hitter Alissa Boswell, who had three kills and an ace in the Hayfield tournament final, and defensive specialist Sanaa Batsukh are also seniors.

Simone Askew, a junior, is the team’s setter.