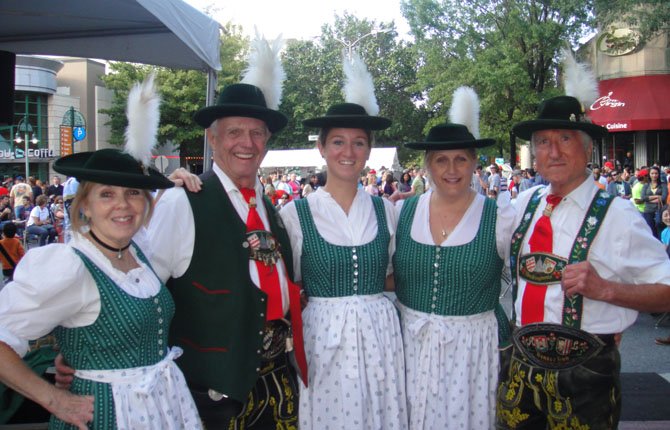 Arlington — The Oktoberfest at Shirlington Village returned for its 13th installment on Saturday, Oct. 6, with lederhosen, dirndls and good cheers for all.

The Oktoberfest at Shirlington Village returned for its 13th installment on Saturday, Oct. 6, with lederhosen, dirndls and good cheers for all.

Crowds swelled throughout the day, and lines stretched around the block with some experiencing lengthy waits for the fun. “Getting that first beer after an hour wait was pretty nice,” said Arata Niizuma, a New York City native who was visiting friends. “I had never heard of Shirlington before, but this Oktoberfest makes me appreciate Arlington, Va. Everyone is friendly and having a good time, perhaps I’ll return next year just for this event.”

A new addition to this year’s Oktoberfest celebration was the Bavarian song and dance troupe Schuhplattler und Gebirgstrachten Verein Washingtonia, a cultural organization. “We maintain Bavarian Schuhplattler dancing, educate the public on culture, and have fun,” said Charles Volkman, president of SUGTV Washingtonia. “This is a good festival, it’s a very nice crowd.”

The absence of full liter glasses at the Shirlington Oktoberfest did not escape Arlington resident Stephanie Otto, who recently returned from a stay in Germany. “The biggest difference between Oktoberfest in Germany and here in Arlington is the glass size, there are no liter glasses,” said Otto. “A couple of microbrews have been very good, the bands are good, and the German food is very authentic.”

The original Oktoberfest was held in 1810 in celebration the marriage between Crown Prince Ludwig I of Bavaria to Princess Therese of Saxe-Hildburghausen.

Oktoberfest in Munich begins 17 days before the last Sunday of October. In 1994 the timing of the celebration was tailored in response to German Unity Day, held Oct. 3.