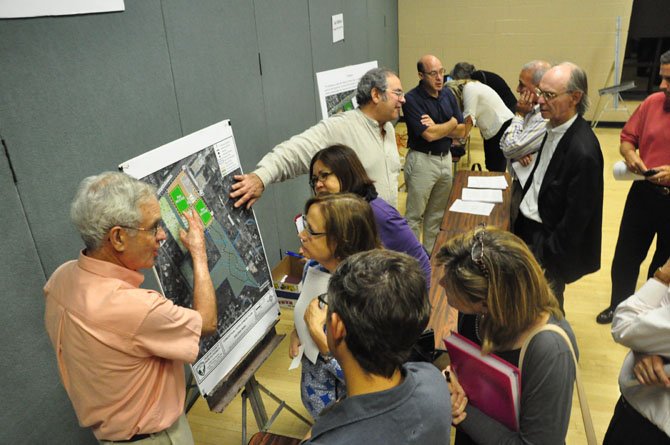 Ed Pickens, a member of the Salona Park Task Force, presents information on the park at a meeting at the McLean Community Center Thursday, Oct. 4. Photo by Alex McVeigh.

The McLean Community Center was packed to the brim Thursday, Oct. 4 with community members waiting to hear the latest from the Salona Park Task Force, which has been charged with coming up with a master plan for a portion of the 51-acre historic Salona property. Located just east of downtown McLean on Dolley Madison Boulevard, 41 acres of the property was purchased from the DuVal family by the County for $16.5 million.

“Tonight’s meeting is a culmination of a yearlong effort by the task force to consult with the residents of McLean so that we can develop recommendations for Salona that reflect the views of the community,” said Margaret Malone, chair of the task force. “The comments we’ve gotten have demonstrated that there are many alternative ideas for how to develop the Salona property into a park that will serve this community. Many comments reflected a broad recognition that Salona is a very special place with a rich history and a prime location in the heart of McLean.”

Salona used to be a farm, and was where the family of President James Madison fled during the assault of Washington, D.C. during the War of 1812, and was also the site of the Union’s Camp Griffin during the Civil War.

Dan DuVal’s family purchased the property in 1953. Terms of the December 2005 sale included the placement of a conservation easement, negotiated between the DuVal family, the Fairfax County Board of Supervisors and Park Authority, as well as the Northern Virginia Conservation Trust.

“From some of the back and forth at meetings over the past year or so, there have been people acting like athletic fields will destroy this place, but what better way for a location to serve the community than to have its residents play and have fun throughout the year?”

THE EASEMENT allows for uses such as recreation (10 acres), rectangle fields, up to 100 parking spaces, playground and picnic areas, trails and agricultural uses. No synthetic turf, lights, cutting of trees and non-agricultural structures are allowed.

Kevin Fay, the Dranesville representative for the park authority board, called Salona a “crown jewel” of the County, which is why the process has been so deliberate and filled with public input.

“Looking at the Salona property and issues such as trails, traffic and environmental integrity, as well as what types of appropriate uses are there, are all things the task force will be looking at once we resume the master planning process,” he said. “We’ve got a great deal of work to do and a great deal of listening to do.”

Supervisor John Foust (D-Dranesville) speaks at a meeting about the future of Salona at the McLean Community Center Thursday, Oct. 4.

Community members presented a wide variety of alternatives in public meetings following the draft plan’s release, which have included features such as a bluebird trail, a nature/history center, a green building, community garden plots, picnic areas and even leaving the land as it is now.

The Oct. 4 meeting featured stations presenting the history and archaeology of the site, neighborhood concerns, as well as possibilities for active and passive recreation, education, a green building, athletic fields and more.

“This area has a shortage of good fields, and we’ve already seen from the park authority that it’s possible to get two fields in here, I don’t think we’re in the position to be throwing that away,” said Randy James of McLean, who has a son that plays sports in the area. “From some of the back and forth at meetings over the past year or so, there have been people acting like athletic fields will destroy this place, but what better way for a location to serve the community than to have its residents play and have fun throughout the year? We’re not paving over it, we’re not putting up lights or turf.”

Members of the Fairfax County Master Naturalists hope, regardless of the final approved use, to help keep the area free of invasive species and perform other environmental tasks.

“We’ll support whatever happens here, we just hope to be able to do things like remove invasive species and perform stream monitoring and maybe some bird studies,” said Judi Booker, chapter president of the all-volunteer organization. “The Salona meadows are unparalleled in Fairfax County when it comes to hosting many rare species.”

NEIGHBORS SAY they have concerns about any further development on the property, because it will increase traffic along Buchanan Street, which runs to the house, and connecting roads such as Sothoron Road, which are hilly and have large curves.

“We’ve had a wonderful relationship with the task force, but we’re concerned about the increased traffic should something like an athletic field be put in. VDOT has already told us that there won’t be a light put in at Buchanan and Dolley Madison, and the County said VDOT might conduct a traffic study, but only after it’s developed,” said Katherine Powell, who lives in the neighborhoods. “If you figure two teams of 25 kids each on the fields at the same time, then another two teams with 25 kids each coming in as the others are leaving, and no sidewalk, crosswalk, or traffic light, that’s a big concern.”

“There is, at this point, no funding for Salona, that is yet to come,” Malone said. “Before ground can be broken, there will have to be an archaeological survey of the property to uncover evidence of Salona’s history and ensure that important archaeological elements aren’t damaged. In addition, there has to be a thorough study of environmental conditions, drainage, RPA and soil issues. We’ve requested preliminary studies, however it is County policy to await the development of a [master] plan before expending the resources for a complete study.”

Members of the task force have solicited opinions from various groups. The task force is expected to take comments received at the Oct. 4 meeting and make their final recommendation by the end of the year.