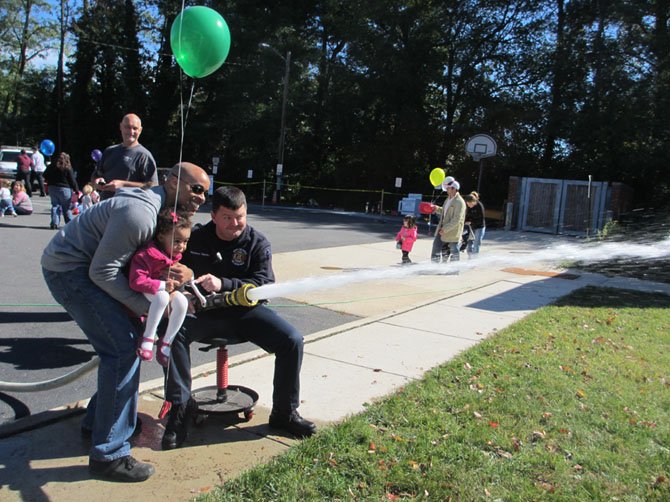 Chloe Edmondson, with a bit of help from her father and a firefighter, aims a powerful spray of water at a target. Photo by Donna Manz.

What little child—or grownup child—doesn’t like fire engines and ambulances? Vienna youngsters got their chance to climb aboard emergency equipment, learn about fire safety, jump in a bounce house, get tattooed and nibble on free hot dogs and popcorn, all while at the Fire Prevention Week Open House presented by the Vienna Volunteer Fire Department on Oct. 13. Several hundred families toured the apparatus bay and participated in activities and events spread out among the grounds and through the building. Parked outside was the new canteen truck, a fire engine, ambulance and antique fire engine. The bright red firefighter helmets were spotted on every little head.

Vienna’s fire department won the “best open house” in the 2nd battalion for the second year in a row.

“We drive by here every day but this is the first time we’ve been here, and it’s been great,” said Vienna mom Alyssa Lehman, with daughter Maddy, 4, and son Carter, 2. Maddy said she liked the ambulance most of all while Carter showed a preference for the fire trucks.

VVFD volunteers put in over 29,55 volunteer hours last year. The station’s fundraising efforts, from Bingo to craft shows, are paying for the station’s new fire truck, costing a half a million dollars. VVFD Chief John Morrison said the station is expected to take delivery of the truck in mid-November.

The weather could not have been more conducive to a family outing. Cloud-free blue skies and cool-ish temperatures epitomized a fall day. Across the street from the firehouse, Vienna Youth Football teams played and bicyclists rode around Mill and Center streets.

My 4-year-old son and I attended the open house yesterday. The Vienna Volunteer Fire Department did a great job of informing and entertaining at the same time.

This was demonstrated last night when my son, using Legos, gave his aunt a pretty complete lesson on fire safety, repeating much of what he heard during the 1:30 equipment and fire demonstration. He built a "fire line" of Legos to protect us, then took red Legos and bunched them into a pile to indicate the "fire." Finally, he taught his aunt how to put the "fire" out safely! Clearly the VVFD made an impact!

The VVFD sponsors the Open House fair as a community outreach, a way to familiarize residents with Vienna’s fire department.

“When you see the excitement, the smiles, and the way the kids’ eyes light up, that is why we do this,” said VVFD Auxiliary President Joan Dempsey.

The open house is not about fundraising. “It’s to greet people and show them what we do,” Dempsey said. It’s for the kids to see fire department staff and volunteers as ordinary citizens, part of the community. “That’s what this is all about,” said Dempsey.