The Vienna Woman’s Club funds scholarships for local students, supports homeless high school students, contributes food and goods to a local charity, and, now, is fundraising on behalf of American veterans and first-responders with PTSD [Post-Traumatic Stress Disorder] who would benefit from the relationship of a companion dog. Benefiting Companions for Heroes [C4H], the Woman’s Club has planned a raffle and fundraiser with partner American Legion Post 180 on Nov. 11, Veterans’ Day.

“For many combat veterans and first-responders suffering from PTSD, these dogs give an unconditional love that save their lives,” said Woman’s Club member Cindy Stewart, co-chairing the American Legion raffle. “It’s a unique source of love and therapy that only an animal can provide.” 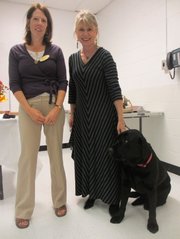 Peg Puhl, co-chair of the Companions for Heroes [C4H] fundraiser, and Lynne Gartenhaus, executive director of C4H, with “companion”-in-training, Ducky.

AT ITS OCT. 17 MEETING, the Vienna Woman’s Club hosted a presentation by Companions for Heroes Executive Director Lynne Gartenhaus. With Gartenhaus was a companion in training, a black lab named Ducky. C4H matches shelter pets with their new owners, combat veterans or first-responders whose service has caused mental suffering diagnosed as PTSD. The founder of C4H himself, David Sharpe, suffered from the disorder after his return from the Middle East. Cheyenne, the pit bull he rescued from a shelter, saved Sharpe’s life on two occasions when he was in despair. Sharpe began to see where dogs can draw combat veterans out of their own heads. Companions for Heroes grew out of that, and, to date, 120 shelter pets have been adopted to the nation’s “heroes.” There is little treatment available for veterans suffering from PTSD, Gartenhaus said.

“Dogs, or cats, break the cycle of despair by intervening in the veteran’s episodes,” said Gartenhaus. “Caring for the companion animal, training them, empowers the veterans.”

The Woman’s Club will begin selling raffle tickets for its prizes, including a $100 cash prize, two $50 gift certificates to Café Renaissance, and a wine and cheese basket, following Post 180’s annual Veterans’ Day program. The Veterans’ Day program starts at 11 a.m. The Woman’s Club will sell tickets until 1 p.m. Post 180 invites the public to its commemoration at 11 a.m.

“Support for vets returning from deployment is lacking in this country,” said Bob Hatter, Post 180 coordinator of the post’s Veterans’ Day program. “The American Legion, in particular Post 180, believes strongly in the support of returning veterans.” Hatter said that it is the feeling of the almost-800 member post and its commander, Ron Patterson, that Companions for Heroes goes a “long way” to support veterans as they return home.

“This is the only local campaign that I’m aware of that benefits both combat veterans and shelter animals at the same time,” Stewart said. “It is truly a win-win situation for our veterans and the animals adopted to a loving home.”