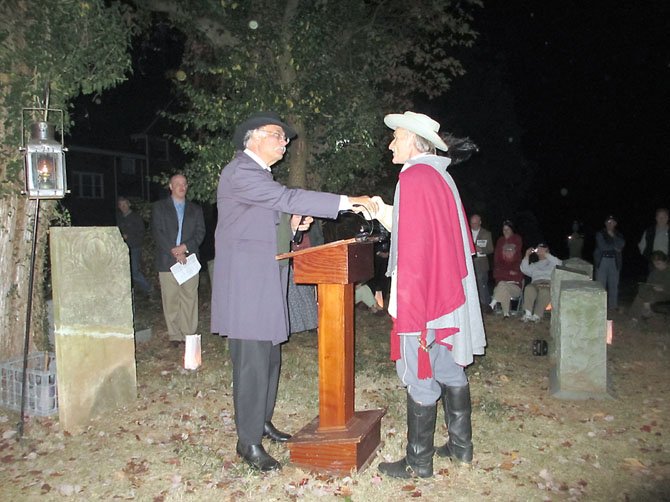 The “spirit” of Col. John S. Mosby thanks Civil War historian Jim Lewis for the opportunity to say “goodbye” to his men. Photo by Donna Manz.

Even a thinly-veiled but luminous moon contributed to the theatrical mood at a dark Flint Hill Cemetery on Saturday night. Shining above the peaks of Oakton Church of the Brethren, the glowing moon cast a spotlight on the grave markers and living historians in period dress who gave life to the unveiling of the marker noting the cemetery’s place in Civil War history. More than 100 spectators watched living history unfold within the candle-lit graveyard. In full military dress, the 17th Virginia Infantry, Co. D. presented and retired the colors. 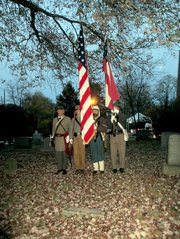 “Over four years and 32 bus tours, this, this, was their very favorite stop on the whole four-hour [Civil War] tour,” said Jim Lewis, historian with Hunter Mill Defense League, referring to the Civil War bus tours he conducts frequently around the Oakton-Vienna area. Lewis, with his extensive knowledge of local Civil War history, was keynote speaker at the unveiling he orchestrated. Double-luminaria identified the resting places of the cemetery’s Civil War veterans.

“This cemetery is a treasure trove of Civil War heroes and civilians,” Lewis said.

Twenty-six Civil War soldiers are buried at Flint Hill, both Union and Confederate, including four Mosby’s Rangers. The marker unveiling, set against luminaria and leaf-hidden lighting, honored the sacrifices of the Civil War dead buried there. Speakers, from David Farmer, president of the Flint Hill Cemetery Association [FHCA], to Church of the Brethren Pastor Chris Bowman and Hunter Mill corridor historian Jim Lewis, noted the events and history of what was then-known as Flint Hill and the cemetery.

THE UNVEILING PROGRAM drew in a coalition of groups: the Hunter Mill Defense League, the Flint Hill Cemetery Association, Visit Fairfax, Historic Vienna, Inc., and Oakton Church of the Brethren.

Pastor Bowman called his church, built over a Confederate fort site, an “outpost of our little Kingdom of Peace.”

Mayor M. Jane Seeman, member of the FHCA, spoke of the relationship Vienna families have with the cemetery, and Patrick Lennon of Visit Fairfax, whose committee supported the historical marker at Flint Hill Cemetery, talked about the partnerships that came together to produce the marker and its historical background, as well as the detailed and vivid unveiling event at the cemetery on Oct. 27.

Mayor Seeman recalled the streetcar that rode from Vienna to the cemetery. Six former Town of Vienna mayors are interred at Flint Hill Cemetery, from Leon Freeman, whose house anchors the historic Church Street district, to Charles Robinson, mayor during Vienna’s pivotal years.

Visit Fairfax, as part of its Civil War sesquicentennial legacy project, imposed a goal to locate a historic marker within each Fairfax County district. Flint Hill lies within the Providence District.

“Our goal is two-fold,” said Lennon. “The project is to draw visitors to the County’s historic sites and to promote cooperation among local historical associations to tell their stories through these Civil War markers.” Visit Fairfax paid for the marker with funding from the Fairfax County Board of Supervisors.

“This event exemplifies the spirit of cooperation the committee envisioned,” Lennon said from the podium.

Lewis recounted Flint Hill history with anecdotes and historical accounts and ended his address with roll call of the Civil War veterans. As Lewis called out each name and rank, a distant voice answered, “here, sir,” or “present, sir.”

THE VOICE of a young teen, representing the youngest Mosby Ranger, who joined at age 14, brought murmurs from spectators. As roll call ended, the spirit of Col. John Mosby strode to the podium to shake Lewis’s hand. “I never had the chance to say ‘goodbye’ to my men,” Mosby said, thanking his host for the opportunity.

In closing, Sharon Bulova, chairman of the Fairfax County Board of Supervisors, recognized the richness of Fairfax County Civil War history and led the marker unveiling. “I’ve attended many unveilings, and I have to say that this is the absolute best,” said Bulova.