Voices From the Past
Votes

Voices From the Past 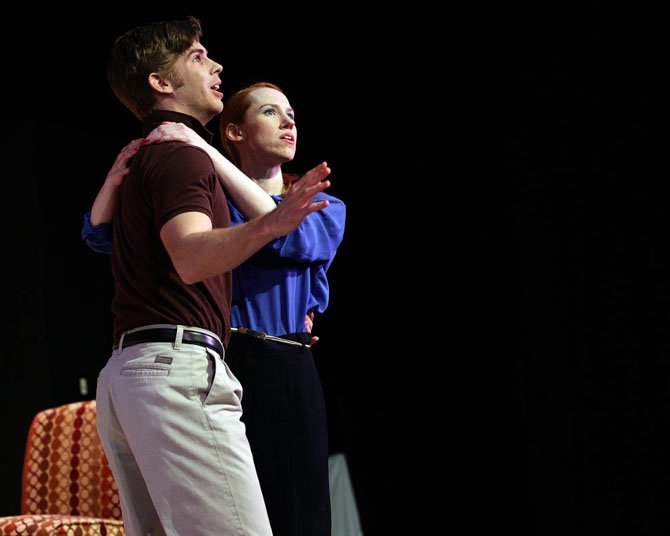 James Myers (Warren Ives) and Heather Benjamin (Lesley Rosen) play new homeowners who hear the chants of a Jewish cantor in the LTA production of “Cantorial.” “Cantorial” is playing now through Nov. 17 at The Little Theatre of Alexandria, 600 Wolfe St., Alexandria. Visit www.thelittletheatre.com.

Arlington — After moving into a new condominium, a young couple begins to hear eerie, hauntingly beautiful Hebrew singing. Unbeknownst to them, their Lower East Side condo is a former synagogue haunted by the ghost of its Cantor.

From the author of “Rosemary’s Baby,” “The Stepford Wives” and the Tony-nominated “Deathtrap” is “Cantorial,” the Ira Levin play now playing at The Little Theatre of Alexandria.

“I was first introduced to the works of Ira Levin in fourth grade through a cousin who loved horror novels,” said director C. Evans Kirk. “‘Rosemary’s Baby’ was a must read. You can only imagine the letter home to my parents from the school concerning my choice of reading. My mom’s response was, ‘You mean he’s actually reading a book!’”

The award-winning director is no stranger to hair-raising plots, having directed productions of Stephen King’s “Misery,” Shirley Jackson’s “The Haunting of Hill House” and Bram Stoker’s “Dracula.”

“I was excited at the prospect of adding a work by Levin to my résumé,” Kirk said. “And as I read ‘Cantorial’ for the first time, I kept turning the page waiting for that moment like Rosemary walking down the long hallway to see her baby for the first time. I don’t think I’m giving anything away by stating that the moment never came!”

“Yes, this is a ghost story, but only because there’s a ghost in it,” Kirk said. “Instead of horror, suspense or espionage, Levin has given us a personal journey…a story of an adopted boy searching for his missing link.”

The synagogue turned condo originally opened in 1896. With the help of an old Jewish grocer, also a former member of the congregation, the new owners learn that the words most often sung mean ''Build your house the way it was.” Not always in sync, they set about uncovering the beauty and history that lies beneath the walls of their home.

“The world we live in is enchanted and mysterious,” Kirk said. “It is not a symbol or a metaphor. However, we often make up symbols and metaphors to explain the unknown. In fiction, it may be hard to believe in vampires and time travel, so it becomes a work of horror and science fiction.”

“Do you believe in angels and miracles?” Kirk said. “If so, do you actually see them and are they a part of your everyday life? In magical realism, writers write the ordinary as miraculous and the miraculous as ordinary. As Freud might have said, ‘Sometime a ghost is just a ghost.’ There is no answer; you just believe. I hope the audience enjoys this production of ‘Cantorial’ as much as I have enjoyed working on it.”

“Cantorial” is playing now through Nov. 17 at The Little Theatre of Alexandria, 600 Wolfe St., Alexandria. For tickets or more information, call 703-683-0496 or visit www.thelittletheatre.com.