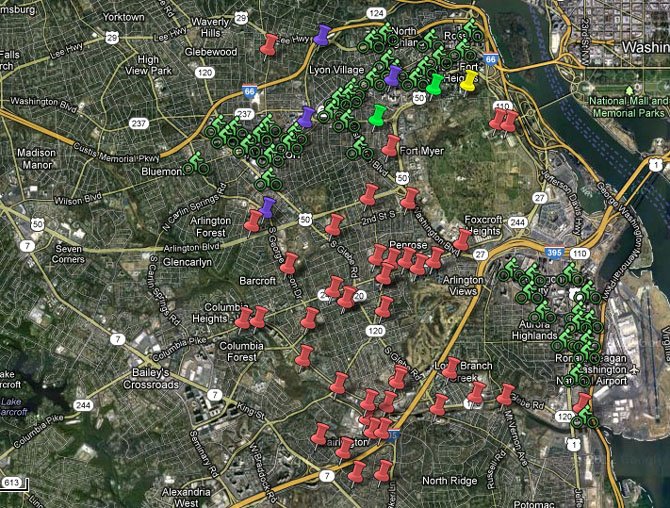 Arlington — By next spring, Arlington residents will have 30 new BikeShare stations to choose from — expanding the existing program of 44 stations dramatically and reaching beyond the Metro corridors for the first time. In the coming weeks, county officials will be meeting with 10 different civic associations to get their input on where the new BikeShare stations should be located. The plan is to expand the program to Shirlington, Fairlington, Columbia Pike, Route 50 and ultimately connecting the Washington and Old Dominion Trail to Four-Mile Run.

“It’s a pretty wide expansion,” said Paul DeMaio, founder of MetroBike. “Not only are we reaching so many more neighborhoods, but we are connecting the two Metro corridors.”

“It’s a pretty wide expansion. Not only are we reaching so many more neighborhoods, but we are connecting the two Metro corridors.”

The expansion will cost about $1.4 million. Most of that will come from the federal government, which will kick in $1.2 million as part of the Congestion Mitigation and Air Quality Improvement Program. The Arlington County government will contribute $200,000, which will come from the revenue generated from parking decals. County officials plan on gathering input about where to locate the stations from the civic associations and from a “crowd-sourcing map” that is linked to BikeArlington.com.

“Some people want it in front of their house, and some people don’t,” said DeMaio. “The interactive web site allows people to comment on why they like a proposed location or don’t like a particular location.”

EVER SINCE the county’s first BikeShare stations were installed in Arlington back in 2010, the program has been a success and expanding steadily. This week, for example, county officials are installing one new station at North Queen Street and Arlington Boulevard near Fort Myer and another at North Barton Street at 10th Street North near the courthouse. Those two stations were approved last year, although installation was delayed for legal reasons.

“Capital BikeShare is an integral part of Arlington’s commitment to cycling and providing transportation options,” said County Board member Chris Zimmerman after the stations were approved last year. “Bringing the red bikes to the Rosslyn-Ballston corridor will make cycling more convenient for Metro area commuters and will offer our community another car-free, healthy transportation choice.”

One of the most popular features of BikeShare is that it allows public-transportation users to travel the first mile or the last mile to the Metro stop or bus station. By using the system of bicycles to connect stations, county officials hope to create a network that’s much more manageable than the current system. Some neighborhood residents say they are concerned about dramatically increasing the number of bicycles on the street because of the potential conflict with cars and people.

“A lot of people think they’re not safe because it’s difficult to make right-hand turns,” said Alfred Taylor, president of the Nauck Civic Association. “In order to turn, you have to veer into the bike lane.”

To increase safety of bike lanes, Arlington transportation are testing a new system of painting the lanes green with “friction coating.” The new system is designed to provide a higher alert to drivers to watch out for bicyclists, who will be increasing steadily as new BikeShare stations open up next year. Five bicycle lanes have already been reconfigured, and county leaders say more are on the way.