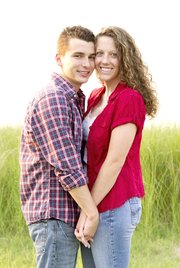 USAF Colonel (Ret.) Loren and Kathy Ahnberg of San Antonio, Texas (formerly of Fairfax Station) have announced the engagement of their daughter, Kaylee Danielle, to Matthew Nicklas Egeland. Matthew is the son of Thomas and Charlene Egeland of Fairfax Station. The bride-to-be is a 2008 graduate of South County Secondary School and a 2012 graduate of Texas A&M University with a Bachelor's degree in environmental geoscience. Kaylee received her commission in the U.S. Air Force in August 2012 and is a 2nd lieutenant currently stationed at Vandenberg AFB, undergoing training as a space and missile officer.

The groom-to-be is a 2009 graduate of South County Secondary School and is completing requirements for a combined BS (2013) and MS (2014) in Ocean Engineering at Florida Atlantic University. Matthew is employed part time at

Kaylee and Matthew look forward to celebrating their wedding with family and friends in Virginia Beach on Aug.17, 2013.