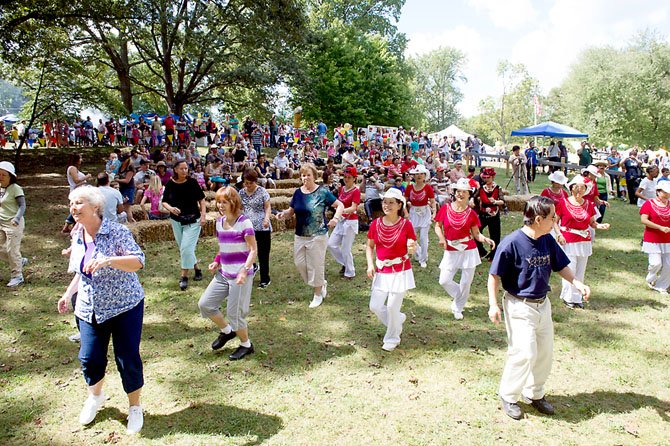 Festival-goers got a surprise on Sunday when a senior citizen flash mob started dancing. Photo by Deb Cobb. 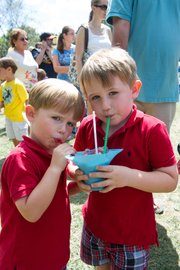 From left, Connor and Harrison Campbell of Burke enjoy slushies at the Burke Festival on Sept. 9.

Burke hosted its biggest block party last weekend as the community welcomed friends and neighbors of all ages for the 35th annual Burke Centre Fall Festival.

The two-day event—hosted by the Burke Centre Conservancy (BCC)—kicked off on Saturday, Sept. 8, as Supervisor John Cook (R-Braddock) and Brian Engler, president of the BCC, welcomed the crowds. But a severe afternoon storm, which brought winds of nearly 60 mph, caused the BCC to cancel the Wine Garden on Saturday evening.

The event will be rescheduled later this month.

In addition to community favorites, such as the arts & crafts show, face-painting, pony rides, funnel cakes and live music, festival-goers got a surprise on Sunday when a senior citizen flash mob started dancing.

The Robinson Rams Dance Team from Robinson Secondary School prepare for their performance at the Sept. 9 Burke Festival.

“I’ve wanted to do something like a flash mob at the festival for several years,” said Jeanne Winslow, the administration director of the BCC, “and Cora Foley with the Burke Senior Center Without Walls made it happen. It was great.”

“‘Awesome’ is the word I heard often with folks at the Burke Centre Festival after our Flash Mob,” said Foley. To see the seniors in action, go to http://www.youtube.com/user/CoraSandovalFoley/videos.

Robert Munson of West Springfield gets assistance across a rope bride or "Monkey Bridge" by Boy Scouts Tony Kresslein ( left) and Zayn Khurshid of the Burke Boy Scout Troop 1345.

“Our goal is to make sure that people walk away smiling after having a great time with all members of their family,” Winslow said.