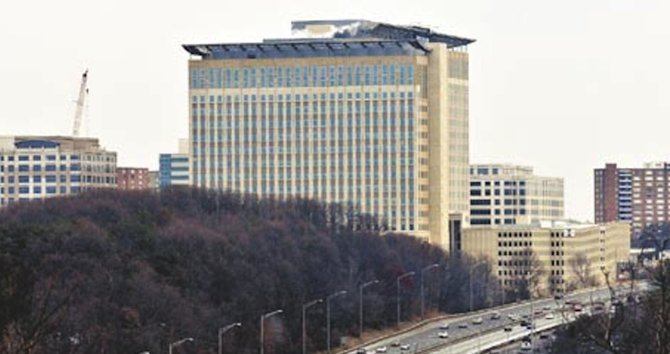 More than 6,000 daily commuters were added to the West End when the Washington Headquarters Service opened last year. Photo by Louise Krafft. 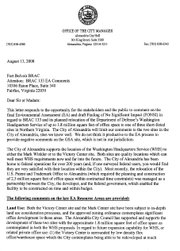 The ghosts of 2008 are haunting the campaign for mayor and City Council, as candidates clash over events leading up to the relocation of more than 6,000 daily commuters to the city’s West End. The site selection of the Washington Headquarters Service as part of the Base Realignment and Closure Commission recommendation 133 have long been a political football. Last year, Arlington County School Board member Libby Garvey tried to use the issue against Alexandria City Councilman Rob Krupicka during a hotly contested primary for the Virginia state Senate. Now the issue has become a dividing line among candidates yet again this year, with incumbents and former incumbents trying to defend their record as opponents go on the offensive.

Republican Bob Wood, for example, didn’t waste any time ripping into the “the BRAC five,” as they have become known, during the first debate of the season last week at Hammond Middle School. In the first sentence of his opening statement, the Republican candidate for City Council went on the offense.

“I welcome all of you here in the shadow of what I call the largest planning failure of the city, BRAC-133,” said Wood, prompting the first round of applause. “It’s time for a change.”

The Defense Department’s selection of the Mark Center site has long been a source of frustration in Alexandria, especially considering the other two sites under consideration for the Washington Headquarters Service were near Metro stations. Yet Alexandria officials actively encouraged the Department of Defense to consider the Mark Center site, even though it was not near a Metro station and did not have the necessary capacity to handle increased traffic. In an August 2008 letter to BRAC officials, Deputy City Manager Mark Jinks said the road capacity could be achieved by widening Seminary Road and expanding the turning capacity from Seminary into the Mark Center site.

“Since Duke Realty is funding these road improvements, this site does not require any Defense Access Roads funding,” Jinks wrote in the letter, which is dated Aug. 13, 2008. “With these improvements, which are to be made at the developer’s expense, city staff is comfortable that sufficient capacity will be created by the proposed and developer-agreed to improvements and that no additional transportation studies are warranted.”

THAT LETTER IS AT THE heart of a raging debate among City Council candidates, forming a wedge between those who were part of the city government that endorsed the Mark Center site and those who were not. That means that the campaign features current council members attacking previous council members who are seeking to make a comeback. One of those is Republican Frank Fannon, who says the previous all-Democratic City Council had lack of leadership on this issue.

“The problem with the previous City Council is that they were asleep at the switch when this BRAC decision went down,” said Fannon, prompting a round of applause. “Two of the members of City Council were transportation professionals when that decision was made.”

“We got rolled,” acknowledged Lovain. “In retrospect, I have a regret, and that is that we took the staff advice to do everything in executive session and verbally.”

“I didn’t see that letter until after it was sent,” said Wilson in a January interview. “Our discussion up to that point had been about making a zoning determination and figuring out a way to get money in lieu of taxes, so I was surprised to see that transportation was part of the letter.”

ON THE CAMPAIGN TRAIL, the issue of BRAC continues to be a hot button issue — especially on the West End, where many residents say the city government has ignored them for years. Many voters say they don’t feel their voices were heard when a traffic corridor was created along Beauregard Street or when a new small-area plan gave a green light to increased density in the neighborhood. But the issue of BRAC looms over all these debates — literally and figuratively.

“It’s an unmitigated disaster,” said Allison Silberberg. “We need to know how it happened so that it doesn’t happen again.”

The story of how a military installation ended up in a leafy office park is a tale of money and location. Duke Realty purchased the Mark Center complex from the Mark Winkler Company is 2006, making it one of the principal taxpayers in the city because the land was valued at more than $225 million. Two years later, the Department of Defense released a request for proposals for a “build to suit” facility that could accommodate 6,400 employees and be ready by 2011. City leaders in Alexandria felt confident that the site known as the Victory Center would be selected.

“We had been told all along that it’s in the bag and that we shouldn’t worry — that was the advice we got,” said Councilwoman Del Pepper. “No member of council was doing the negotiating, incidentally.”

DUKE OFFERED its property at a price that was about $200 million less than the Victory Center, making the decision easy for the Department of Defense. The offer also represented a significant windfall for Duke compared to a private development deal, which would have been subject to density limitations and traffic-management requirements from Alexandria City Hall. Because the Pentagon is exempt from city regulations, Duke was able to sell the land and develop the property without having to deal with limitations imposed by the city. Alexandria city government went along with the idea, endorsing the Mark Center site in addition to the Victory Center.

“This was an abdication of leadership,” said Wood. “And the people responsible for that decision need to be held accountable.”

The consequences of moving 6,000 daily commuters to Mark Center have yet to be fully realized. Alexandria could end up losing the Center for Naval Analyses and the Institutes for Defense Analyses because of the increased traffic gridlock on the West End. If the Department of Defense moves into those locations, Alexandria would lose property tax revenue because the federal government does not have to pay taxes. Several candidates said they would oppose an expansion of Department of Defense in Alexandria.

“One of the things we need to do is explore how much economic development — small businesses and offices and the like — that we can to increase the revenue that we bring to the city. That needs to be something we push,” said John Taylor Chapman. “It shouldn’t be an expansion of another government facility that, frankly, is not really wanted in this city anyway.”

Councilwoman Alicia Hughes said that if federal government officials want to move more employees into Alexandria, they should look at the Victory Center. She also suggested that federal officials work out a deal similar to the one negotiated for the U.S. Patent and Trademark Office, which is privately owned and leased to the federal government. That way the city can charge the private land owner property taxes.

“We are not against government agencies occupying space in Alexandria,” said Hughes. “But I would encourage the lease rather than the purchase.”