Vienna businesses are building their own association. 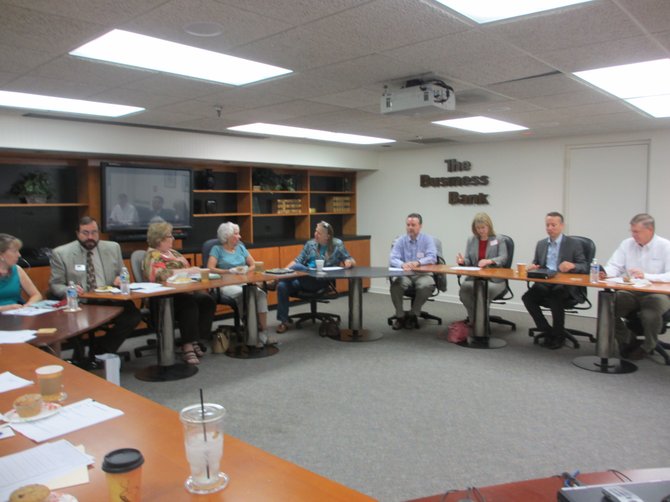 The conference room at The Business Bank was full of prospective members at the second organizational meeting of the Vienna Business Association. Photo by Donna Manz.

Tony Bennett may have left his heart in San Francisco, but, if Vienna businesses wrote a song, they would lament that the newly-renamed and newly-relocated Tysons Regional Chamber of Commerce left its heart in Vienna. When the Chamber changed its name from the ViennaTysons Regional Chamber of Commerce, it also announced a move out of Vienna to Tysons Corner. That did not sit well with several Vienna businesses, neighbors who feel they are the business heart of Vienna.

“The surprise came not so much as the move as it was the name change,” said VBA co-organizer Kathy Georgen of Georgen and Scarborough.

THE ANNOUNCEMENT came less than a month after fiscal year 2012-2013 dues were paid, and several TRCC members were considering asking that their paid dues be returned to them. According to Georgen, TRCC emailed its members with the announcement of relocation and name change on Aug. 20, and, the next morning, the Tysons Chamber held a press conference to publicly make the announcement. Georgen said she resigned her VTRCC membership when it was no longer VTRCC. “I didn’t agree with the direction the chamber is taking,” Georgen said. Within days of the TRCC announcement, Georgen and business partner D.H. Scarborough got the word out that they were starting a Vienna-focused business association, extending a personal invitation to Mayor M. Jane Seeman. Georgen said the mayor was “thrilled” with the idea.

At the first organizational meeting—on Aug. 31—25 business people showed up to discuss the future of the Vienna business community. The main focus of VBA is on the community, Georgen said. Already, VBA is planning community events to express gratitude to Vienna customers, from a “first night” celebration along Church Street to “Know Your Neighbor,” a support-local-business-day that features discounts and special offers.

Business leaders, about 30 of them, joining VBA were enthusiastic about volunteering their time and expertise to the new venture.

With the departure of the Tysons Regional Chamber of Commerce to Tysons Corner and the simultaneous name-change, Georgen and Scarbourough formed a solution: why not rebuild the Vienna chamber of commerce as the Vienna Business Association? In less than two weeks, the VBA filed with the IRS and held two organizational meetings. Approximately 30 Vienna businesses said they are planning on joining the VBA and making sure it reflects the will of its base: to promote locally-run Vienna businesses and foster partnerships with the community that supports them. Local residents participated in the meeting, as well. “I’m trying to help out any way I can,” said Pasha Majdi.

Small businesses really are part of the whole Vienna community, said former VTRCC President Diane Poldy. “In Vienna, it’s businesses and community working together to support to benefit both.”

Tysons Regional Chamber of Commerce President Lisa Huffman said TRCC will continue to support the Vienna businesses and community as it has done over many years.

“Both Vienna and Tysons businesses can be supported by one chamber,” said Huffman. “Many Vienna businesses are wanting to do business in Tysons and many Tysons companies, even the large ones, are wanting to do business with the smaller companies in the region, including Vienna. In addition, we will be creating programs that target the needs of each.”

Kathy Georgen, one of the organizers of the new Vienna Business Association, talks to prospective members about the group’s goals and strategies for forming a partnership with the Vienna community.

WHEN THE BOARD VOTED to make the changes, they also voted to form the Vienna Business Council, Huffman said. “The VBC will focus on the needs of the Town of Vienna and its business community. The chairman of this committee will have a seat on the chamber's Board of Directors and will serve as a direct link to the chamber.”

Huffman said that only a couple of TRCC members had contacted the chamber about leaving it. “We’ve had several others who have stated that they would belong to both, and have continued to participate in chamber activities.” Huffman notes that there are many businesses and individuals who belong to more than one organization or chamber. “We have received a lot of support for the decision from our membership, including Vienna-based companies.”