Artists at Work At Oakton Elementary 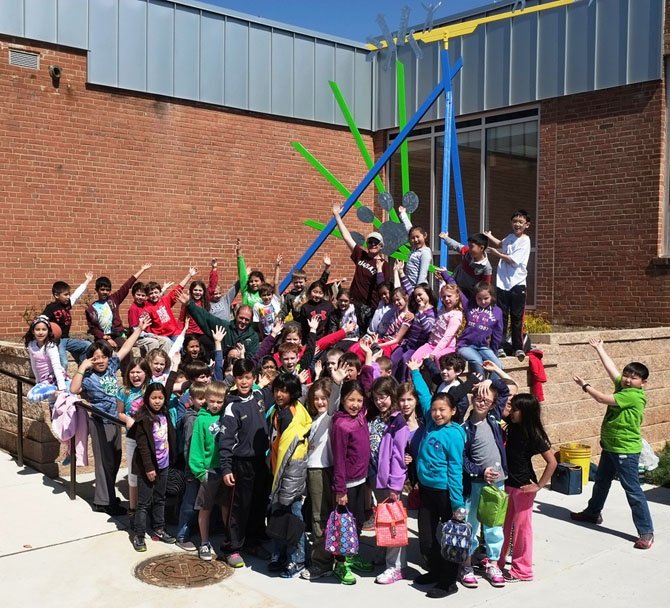 Last week, more than 300 Oakton Elementary students worked with artist Kevin Reese, a sculptor-in-residence, to design and build this high-flying, swirling mobile unveiled during a dedication ceremony at the school on Friday, April 5. Jodi Beatty 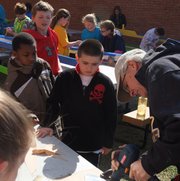 Last week, sculptor-in-residence Kevin Reese shows Oakton Elementary students the details of building a 16-foot swirling mobile. The public art was unveiled during a dedication ceremony at the school on Friday, April 5.

The kinetic sculpture—16-feet-tall, with bright blue and green swirling arrows—looks like a classic Alexander Calder mobile on exhibit at the National Gallery of Art.

But this visually striking mobile is planted in front of Oakton Elementary School, the new capstone of the school’s $18 million two-year renovation project.

The towering artwork, designed in collaboration with OES students and sculptor-in-residence Kevin Reese, was dedicated during a school ceremony Friday, April 5.

“It is a type of sculpture known as a ‘swirling stabile,’ meaning that the highest portion freely rotates in the breeze,” said Martha Allen Godin, the school’s cultural arts coordinator and longtime PTA member, who spearheaded the art project. “The design incorporates a Panther Paw representing the school’s Panther mascot. It also includes arrows pointing in many directions symbolizing the many possibilities opened up through education, student figures and a star.”

“It is a type of sculpture known as a ‘swirling stabile,’ meaning that the highest portion freely rotates in the breeze. … The design incorporates a Panther Paw representing the school’s Panther mascot.”

DURING A FIVE-DAY PERIOD last week, the PTA hosted Reese, who worked with more than 300 students in fourth, fifth and sixth grades to help create the permanent kinetic sculpture for the school. Students helped design, measure, cut, sand, paint and assemble the sculpture, giving them a hands-on experience of the creative process.

“Students get a tremendous sense of ownership in the result,” Reese said. Since 2001, Reese, a sculptor and actor, has worked nationwide with thousands of children to build more than 90 moving pieces of public art, including sculptures at Saratoga Elementary School in Springfield and Hunter Woods Elementary in Fairfax.

“My goal is to allow them to see something they’ve had a hand in from beginning to end. It’s a powerful feeling for them.”

Godin said the blue and green colors reflect the school colors and mirror the decorative tiling in the new portion of the building.

“While Kevin Reese has completed many school sculptures since 2001, he says that this is the first one he has ever done that is positioned in a raised bed nearly 5 feet off the ground. When combined with the height of the art piece itself, this means the sculpture will reach nearly to the school’s new roof,” Godin said.

“Our students loved working with Kevin and were so proud of their creation,” said OES Principal Christine Gray. “This is an experience they will never forget, and the art is something they can come back and see year after year.” 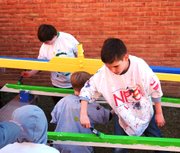 OES students paint pieces of what will be a 16-foot swirling mobile. Last week, more than 300 Oakton Elementary students worked with artist Kevin Reese, a sculptor-in-residence, to design and build a high-flying, swirling mobile unveiled during a dedication ceremony at the school on Friday, April 5.

91,000 square feet, in part to accommodate the projected increase in student population from 700 to more than 750 students in 2014.

In addition to high-speed Internet access, the refurbished classrooms now have brighter lighting and an audio enhancement system which allows the voice of the teacher and sound from the computer to be equally distributed throughout the room.

THE RENOVATION also included major improvements to the building’s infrastructure: the school’s fire suppression and security systems were updated, and new state-of-the-art HVAC systems and high-efficiency boilers were installed.

A high-tech media center with student/teacher workstations replaced the school’s retro and cramped library space. The media center is located in a new wing of the school that includes a centrally located main office and new classroom space.

Originally built in 1913 as a high school—when Woodrow Wilson became president and most residents rode bikes and electric trolleys—the school was rebuilt as an elementary school after burning down in 1945.

For more information on the art project, visit Kevin Reese’s website at Schoolsculptures.com.