“The Life and Times of Nicholas Nickleby” debuts April 18. 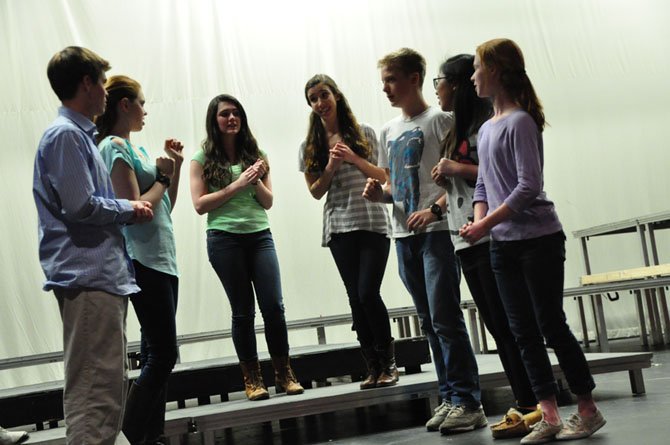 Students in Langley High School’s production of “The Life and Adventures of Nicholas Nickleby” prepare a production of “Romeo and Juliet,” a play within the play. Photo by Alex McVeigh.

McLean — When the plans were announced for Langley High School’s spring play, many of the cast and crew weren’t familiar with the title. While “The Life and Adventures of Nicholas Nickleby” isn’t at the top of the list of the most popular Charles Dickens works, after doing their research, the cast found plenty to get excited about.

“After we heard about the play, I looked it up and was very interested,” said senior Chris Paul, who plays the title role. “I also found out the original British stage production was eight hours long, so obviously we had to do some trimming.” 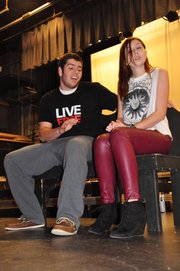 Students in Langley High School’s production of “The Life and Adventures of Nicholas Nickleby” prepare a production of “Romeo and Juliet,” a play within the play.

The play is based on Dickens’ third novel, which tells the story of a young man dealing with the sudden death of his father, trying to keep his family afloat and deal with an uncle that hates him and a sadistic schoolmaster.

“It’s a very multifaceted role, a lot of the character involves putting on a façade and trying to lead his family at the same time,” Paul said. “He’s a very headstrong character, and I had fun staying angry for so long onstage.”

“I know it sounds weird, but I’ve always wanted to play an evil uncle. Chris is one of my good friends, so it was even more fun to sit up there and glare at each other,” he said. “My final scene was probably my favorite, a big monologue leading up to a big dramatic finish, which I’ve always wanted to do.”

LIKE MANY DICKENS STORIES, males dominate much of the story. Kirsta Hackmeier, a sophomore, plays Kate Nickleby, the younger sister.

“It was a little scary at first, but interesting, because as a female I’ve got to play off a stage full of guys, but she also stands out more in scenes and really makes an impact,” she said. “She’s supposed to be strong, but quiet, submissive but rebellious, which is difficult to show onstage.”

Hackmeier said she especially enjoyed a scene when Kate fends off a male attacker.

“That wasn’t something that was too common in the time the story was written, but it was good to be able to show some strength and fight the attacker off,” she said.

The students present the play in highly narrative form, meaning the background players take turns narrating the actions onstage, with actor’s dialogue filling in the spaces.

“It’s a really interesting way to present a play, but it’s definitely not easy,” Cour said. “But I like how it incorporates a lot of people, and when it all comes together, it comes across well.”

“There’s always something going on, but that also makes it tough to keep track of, because we need every single person onstage to be in the right place and know which part of the narration they’ll be reading,” she said. “It moves very fast, there are no breaks.”

While much of the play is dark in subject matter, the actors said they did have fun during a part of the play when characters put on a comically bad rendition of “Romeo and Juliet.”

“Putting on the production of ‘Romeo and Juliet’ was a lot of fun, because that was our fall show, and after spending so much time trying to turn that into a great show, this was one where we had to make it as terrible as possible,” Paul said. “It was especially fun for me, because I play Romeo in both productions.”

“I like being the comedic one that brings some lightness to the play. I think the role has a universal appeal, with a lot of loud histrionics and pushing other actors around,” he said. “Everyone knows somebody like that, and by that point in the play the audience is looking for some comic relief.”

The students will also take away about half of the Langley auditorium’s 800 seats to create a more intimate environment.

THE STAGE is made up into a series of elevated platforms, each at a different height and each becoming a self-contained location during the play that can be vastly separate than the other levels, even within the same scene.

“By shrinking the auditorium, the audience will be connecting a lot better with the actors and much closer to what’s going on,” said senior Alex Swann, the tech director. “With the different levels, there are a lot of scenes within scenes, and the end result is a very dynamic show.”