City taxpayers are about to assume financial risk for new Metro station.

“You can’t build half a station. You have to build all of it. You basically have to undertake probably a good portion if not all of the debt all at once, and once you do that there is a required debt service.” 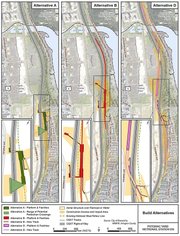 Alexandria taxpayers are about to gamble on the future, rolling the dice on development at a former railroad yard to fund a new Metro station. City officials are expecting Potomac Yard to generate $1 billion worth of revenue in the next three decades, an expansion of the tax base that would help fund construction of a Metro station that could open its doors as early as 2018. But that plan comes with significant risk.

"Sure there's a risk, and it's a big project so it's a big risk," said Frank Shafroth, director of the Center for State and Local Leadership at George Mason University. "That's why it's important that the city recognizes the risk because that allows the city to control it."

In the city manager's proposed capital improvement plan, a section on the new Potomac Yard Metro station explains that the "financial risk to the city must be carefully structured and managed." Depending on the location and design of the station, the project could cost the city anywhere from $194 million to $459 million — all of which would be borrowed by the city government to finance the construction of the facility.

“You can’t build half a station. You have to build all of it," said Deputy City Manager Mark Jinks. "You basically have to undertake probably a good portion if not all of the debt all at once, and once you do that there is a required debt service.”

THREE LOCATIONS are currently under consideration as part of the Environmental Impact Statement in addition to a no-build scenario. Alternative A is the southernmost location, estimated to cost $194 million. It would be located adjacent to the Potomac Greens neighborhood. Alternative B is a short distance north, behind the Target. Its estimated cost is $249 million. Alternative C was an underground station that has been rejected as logistically impossible. Alternative D is a $459 million above-ground design similar to the ones now under construction in Tysons Corner.

"A lot of us look at Alternative D and see something that's very expensive, and we all know what the Tysons Corner aesthetically looks like," said Jinks. "But while we may be skeptical about D, the environmental impact process requires us to study it because it is technically feasible."

A draft Environmental Impact Study is expected as early as next month, examining everything from economic issues and transportation needs to noise and vibrations at the station. Each of the three alternatives will be examined, as will a "no-build" scenario in which no Metrorail station is constructed. This fall, City Council members are expected to select a "locally preferred option" for the location and design of the station — if council members decide they want to move forward with construction of a Metro station at all.

PLANS FOR REDEVELOPING Potomac Yard stretch back more than two decades. The first proposal was a 16 million square-foot development known as Alexandria 2020, a mixed-use neighborhood that continued the street grid of adjacent neighborhoods. The new neighborhood would feature a tree-lined interior boulevard and a Metrorail station near the center. In 1992, the City Council approved new zoning that opened the door to 8.8 million square foot of development at Potomac Yard.

Alexandria 2020 became a thing of the past, and no formal plans were ever submitted. Then city leaders considered a proposal to locate Jack Kent Cooke football stadium at Potomac Yard, but that did not happen. Then the property owner wanted to locate the Patent and Trademark Office here, but the plan was denied by the Alexandria Planning Commission. By the mid-1990s, the northern end of Potomac Yard was developed into a suburban-style strip mall featuring a Target and a Barnes and Noble Bookstore.

Recent years have seen a flurry of activity at Potomac Yard. In the summer of 2010, council members approved the Potomac Yard small-area plan for the 69-acre tract that will have up to 7.5 million square feet of development, which is expected to increase the tax base by 10 to 13 percent. The next year, council members approved a Tier I tax district of 20-cents that's already in place. They also approved a Tier II tax district with a 10-cent levy that will be initiated in the calendar year when the Metro station opens. Now city leaders are likely on the verge of borrowing about $270 million to finance the construction of the Metrorail station.

"There is some uncertainty with this," said Councilman Tim Lovain. "If, for some reason, some of that construction is delayed that delays the additional tax revenues."

ALEXANDRIA TAXPAYERS won't start making payments to service the debt until 2016, an annual cost that will start at $16.5 million a year and eventually reach about $20 million a year by 2027. Budget officials plan to finance the deal by taking advantage of the expanded tax base in addition to money from two special tax districts and contributions from developers. City officials say they expect Potomac Yard to generate more than a billion dollars of tax revenue in the next three decades.

"The city has to be reasonably comfortable that the growth and development plans are moving along with enough pace that the debt service revenues will be there," said Jinks.

Critics say the gamble might not pay off for the city. If the economy tanks and development doesn't happen, city leaders will have to scramble to make new plans. Even if the development comes on line as planned, the new revenues won't roll into city coffers immediately. Some critics say they are skeptical of the city's estimates and wonder if the cost projection might increase in the future.

"It's just a gamble they can build something like Pentagon City at Potomac Yard, and it may not work," said Rosemont resident Katy Cannady. "It's taxing one generation in the hope that the next generation will reap the benefits. It certainly won't be those of us who are living here now and paying property taxes."