Alexandria Little League held its 2013 opening day ceremony on Saturday morning, April 6, at Little Simpson Field. In honor of the 60th anniversary of the Alexandria League, the Washington Nationals mascot Screech the Eagle was on hand to greet the players and coaches as they entered the field. Captain Sterling Gilliam USN, president of the Alexandria Little League, hosted the ceremony. Special guest Washington Nationals Racing President Teddy Roosevelt delivered the keynote address to the players followed by rounding the bases with a high-five run.

Alexandria Aces owner and CEO Don Dinan announced the winners of the player’s essay contest on “Why I Love Baseball.” Winners included Samuel Mostow, Tucker Narkinsky and Owen Biesada who all read their essays and received $25 gift certificates. The grand prize winner, Ian Leon, received a $50 gift certificate and led all in reciting the Little League Pledge.

Coaches and players remove their caps and face the flag for the playing of the National Anthem at the 2013 Alexandria Little League opening day. 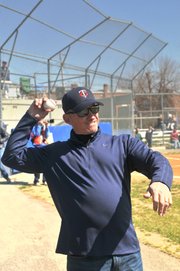 Donny Simpson warms up his arm in preparation of throwing in the first pitch of the season at Little Simpson Field. 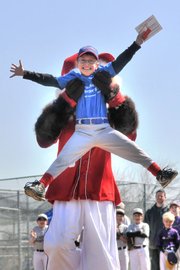 Washington Nationals mascot Screech the Eagle lifts AA player Samuel Mostow high in the air at the conclusion of Samuel reading his essay on why he loves baseball.

Washington Nationals Racing President Teddy Roosevelt delivered the keynote address to the players followed by a round the bases high-five run. 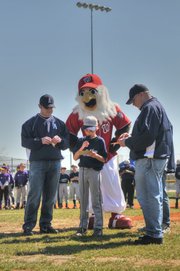