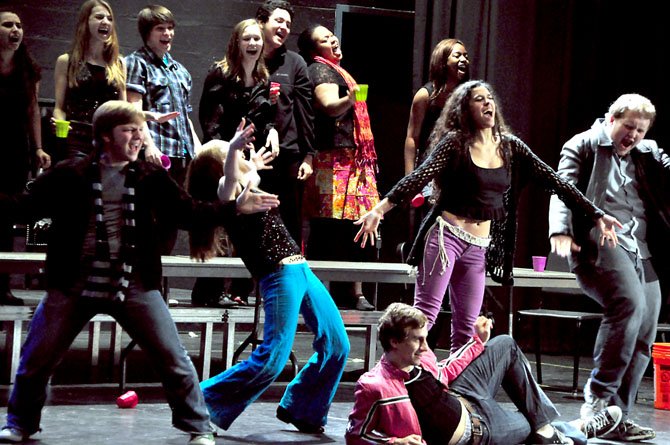 Poverty, AIDS and a search for identity are triumphed by love and hope in Jonathan Larson’s trailblazing musical, “Rent.” “Rent” premiered at the New York Theatre Workshop in 1996, and it chronicles the lives of struggling young adults in New York City through the lens of an aspiring filmmaker, Mark, and his camera. This compelling story about the hardships of city living was once again brought to life at McLean High School.

Alex Stone played Mark Cohen, a young man filming a documentary in the Lower East Side in New York City. Mark captures the stories of his seven friends as they embark on new relationships and face the problems associated with being HIV-positive, while still finding ways to pay their rent. Stone portrayed his driven, poised character with a hopeful charm that guided the cast, and his impressive vocals engaged audiences.

Among the plethora of cast members, another noteworthy character was Angel (Max Johnson). Johnson provided comic relief by strutting across the stage in heels and girly outfits. His portrayal of an optimistic drag queen that restores hope to “her” desperate friends was genuine, and his choices stood out among a slightly indistinct cast. Each of his actions was motivated; even a simple pointed glance as Angel was called “he” rather than “she” brought depth to the character.

Ensembles in this show are essential to the plot as well as the meaning. The support group ensemble was onstage often, joining in during songs such as “Will I” and “Seasons of Love,” a famous ballad sung beautifully by the entire cast. Members of the support group, particularly Ben Barton, revealed the inner turmoil of someone who is HIV-positive. Although some singers struggled with pitch, soloist Carla Calderon belted incredibly well during her emotional performance in “Seasons of Love.”

In terms of technical elements, McLean’s team went above and beyond. The set, which was Mark and his roommate Roger’s apartment, had many levels and looked lived-in. Every detail reflected a 1990s loft, from the posters everywhere to the extension cord flowing out the window, which was suspended in the air. Graffiti had been painted onto faux bricks bordering the stage, always reminding audiences of the urban setting.

Lighting, directed by Max Lindsay, was equally impressive. The lighting choices always reflected the mood onstage; for instance, a red glow was cast upon Mimi during her risqué performance of “Out Tonight.” The frequent light changes were executed without a hitch and added yet another layer to the complex production. Sound, although many of the actors battled diction problems, lacked any major issues.

Costumes and makeup, designed by Siena Richardson, Emma Paquette, and Polina Tamarina helped to light up the stage. Displaying an artistic Bohemian look, cast members were dressed in coordinating bold colors. Each character had a specific palette; during “Over the Moon,” Maureen was dressed in bright turquoise pants that matched both her stool and the backup dancers. Additionally, Angel’s makeup was not overpowering yet still conveyed the essence of a drag queen.

The joys, woes and relationships of eight New Yorkers at the end of a millennium were told artistically through the work of McLean’s talented drama department.