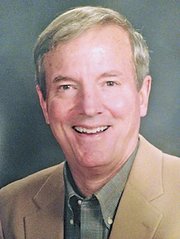 “I am most concerned about preserving jobs here in Virginia,” said Wood, a graduate of T.C. Williams High School and the U.S. Military Academy at West Point.

The new commission will address the impact that “indiscriminant defense budget cuts due to sequestration will have on the economic well-being of the citizens and businesses of Virginia,” according to McDonnell's Executive Order.

The order estimates that Virginia could lose approximately 82,000 direct jobs at federal agencies and contractors and an additional 82,000 indirect jobs supported by business and personal spending.

Wood ran unsuccessfully as a Republican candidate in last year's City Council election. He was a member of the city's Waterfront Planning Workgroup and co-authored the report on the group's recommendations regarding the controversial redevelopment of the city's waterfront.

During his 36 years of Army service, Wood served in command and staff positions from company to division in units stationed in the United States, Germany and Korea. He commanded troops in combat during Operation Desert Storm and served as chief of staff for a major NATO headquarters in Bosnia.

As a general officer, Wood commanded the 2nd Infantry Division in Korea followed by duties as the deputy commander of U.S. Joint Forces Command. He was stationed at the Pentagon on 9/11 and led the Army staff planning for operations responding to this attack.

Wood completed an MBA at the University of Chicago before teaching economics and systems analysis at West Point. He was named a White House Fellow in 1984 and worked in the National Security Council for President Reagan. In 1993, he completed a senior fellowship at the Walsh School of Foreign Service at Georgetown.

Upon his retirement from the Army in 2008, Wood founded an Alexandria-based consulting business that focuses on strategic planning and leader development. He is a board member of The Fairfax, a military retirement home, and the National Trust for Wounded Warriors. He is a founding member of the Thayer Leader Development Group at West Point, a corporate leader-training center.

“I am looking forward to working on this commission,” Wood said. “We need to help preserve jobs and keep Virginia strong in its role of support for national security.”