More than 80 cars lined Market Street and filled the Pavilion.

By Andrea Worker/ The Connection

Ferrari Club of America (FCA) member Jim Taylor’s customized Ferrari 599 HGTE made an appearance at the Mid-Atlantic FCA Spring Thaw event on its celebratory relay around the country, stopping at 50 cities in 50 weeks to mark the club’s 50th anniversary and to raise money for Ronald McDonald House Charities and the Paul Newman Double H Hole in the Woods Camp.

The Mid-Atlantic Region of the Ferrari Club of America (FCA) held their annual Spring Thaw gathering at Clyde’s of Reston Town Center on Saturday, April 13. The vibrant colors of all those exotic cars and the roar of those super-engines echoing in the valley of Market Street was exciting enough for any car enthusiast, but this year the club provided an added bonus for the viewing pleasure of the crowds. They also teamed up with Ronald McDonald House Charities of Greater Washington, D.C. to raise funds for the organization.

Claudia Lewis, director of Community Relations for Ronald McDonald House Charities of Greater Washington, was on hand at the FCA event with lots of examples of how the club members’ donations will benefit not only the Ronald McDonald House, but the variety of programs offered by the organization, like the Car Mobile that provides free health care to thousands of underserved children annually—right in their own neighborhoods.

More than 80 cars lined Market Street and filled the Pavilion, but the crown jewel in this year’s collection was undoubtedly the Ferrari 599 HGTE generously sponsored by FCA member Jim Taylor. The 599, the last one in the series built for the United States, was completely customized to commemorate the club’s 50th anniversary. As part of the club’s yearlong anniversary celebration, Taylor’s car is traveling around the country.

Christopher Ho of Oakton does a bit of last minute polishing for his dentist parents, Drs. Trung and Tien Ho. The Ho family was much taken with the information from Ronald McDonald House Charities and was spotted in conversation with Claudia Lewis from the organization, discussing ways to volunteer or assist with programs.

With “50 Cities in 50 Weeks” as the motto, the car is making a relay run, handed off to clubs in different regions, appearing at car shows, races, charity events and even stopping at several Ronald McDonald Houses along the route where club activities put smiles on the faces of a lot of youngsters in need of a break from the realities of their illnesses. Throughout the journey, the club is sponsoring events to boost awareness and financial support for both the global and regional Ronald McDonald Houses and Charities, as well as the Paul Newman Double H Hole in the Woods Camp, that provides year-round programs for children with life-threatening illnesses. The camp is Taylor’s favorite charity. 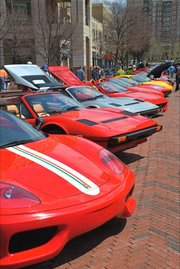 There was no shortage of smiles at this showing—on faces both young and not-so-young—as the throngs gathered and folks snapped countless pictures of themselves alongside a favorite model that seemed to immediately hit the Facebook, Twitter and Instagram airwaves.