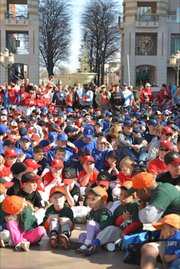 Although there was no official headcount, judging by the size of the crowds it’s just possible that all 692 registered players, and their moms, dads, sisters, brothers, aunts, uncles, cousins and grandparents all turned out for the 20th Annual Reston Little League (RLL) Opening Day Parade through Reston Town Center. And don’t forget to add in assorted coaches, staff and volunteers. RLL President Jason Walker declared “that teaching teamwork is one of the reasons that baseball is good for you,” and proved the point when what had looked like colorful chaos at 8:55 a.m. turned into a fairly organized march up Market Street at almost 9 a.m. on the dot.

The teams and their entourages gathered at Reston Square Park before beginning the parade to the Pavilion. Some of the players posed for family photos. Some practiced walking while holding their team banner at just the right height and angle. Quite a few visited with Loudoun Hounds mascot “Fetch.” (The Hounds are the future professional baseball team hoping to be ready to throw the first pitch in 2014.) And some just raced around the park like they were trying to outrun the throw to home.

After waving to the curbside fans as they marched along, the teams ultimately were settled into the Pavilion where an Opening Day Ceremony was conducted, complete with lots of loud and inspiring music, a welcome by Walker, and support from honored guests like U.S. Rep. Gerry Connolly (D-11) and Supervisor Cathy Hudgins (D- Hunter Mill). The speakers all reminded the assembly that baseball, in all of its division forms, offers an opportunity for all youngsters, girls and boys, to join in. The RLL includes a “Challenger Division” for children with physical and/or mental disabilities, and BlastBall for players as young as 4 years old.

And then the colorful chaos returned as the teams were released from their ceremonial duties and went off to do what the day was really all about—playing ball.