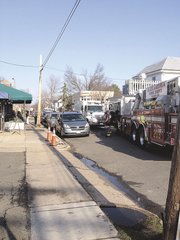 The Alexandria Fire Department responded to a report of smoke coming from the basement boiler room of a two-story commercial building in the 100 block of East Del Ray Avenue at 3:08 p.m., Friday, April 5. Arriving firefighters found moderate smoke conditions coming from a side stairwell leading to the basement. They also encountered smoke on the first and second floors which initiated a request for a second alarm to assist with the fire. A number of businesses in the building including a restaurant and market were evacuated. The intersection of Mount Vernon and Del Ray Avenues was closed to all traffic for more than two hours. Firefighters located the fire concealed in a rear wall of the market. The fire was declared extinguished at 4:19 p.m. Fire investigators determined the fire to be accidental. The fire caused an estimated $200,000 in fire and smoke damage to the building. There were no reported injuries.