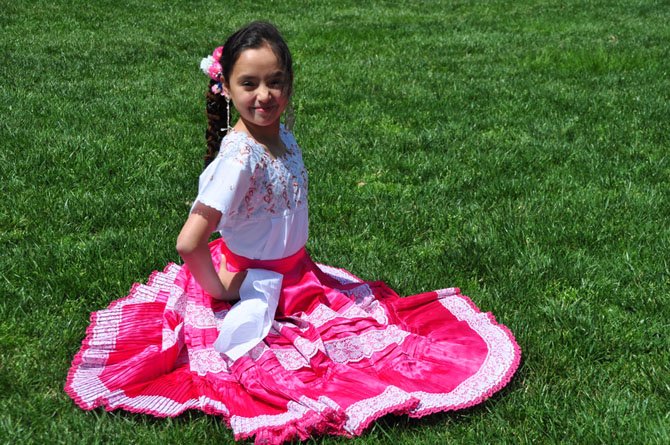 Isabella Tablett has been nominated for a National PTA Reflections award for her Peruvian dance choreography. Tablett is a fourth grader at Great Falls Elementary School. Photo by Alex McVeigh. 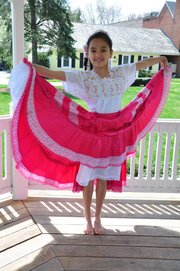 Isabella Tablett, a Great Falls Elementary School fourth grader, is nominated for a National PTA award for her dance choreography.

Isabella Tablett has been interested in dance and dance choreography since she was 4 years old. Now a fourth grader at Great Falls Elementary School, Tablett’s recent routine has won her awards at the school, cluster, district and state levels.

Tablett entered a two minute and 39 second video of her dancing the marinera, a traditional Peruvian Dance, to the PTA Reflections contest. The contest selects winners among student-submitted works of art in a number of different categories. Tablett’s dance has been nominated for the National PTA Reflections award.

“They announced the contest during my school’s morning announcement, and I decided I would come up with a dance, and my mom filmed it,” she said.

“The magic for me came in the zapateo part of the dance, when I can use the movement of the dress to the rhythm of the music.”

This year’s contest theme was “Magic of the Moment,” and Tablett said she wanted to find a special moment in her dance to illustrate the theme.

“The magic for me came in the zapateo part of the dance, when I can use the movement of the dress to the rhythm of the music,” she said. “There’s a middle part when you would usually show your partner the best parts you know.”

Isabella Tablett’s mom Violeta is a native of Peru. All three of her children are proficient in the dance of their culture. 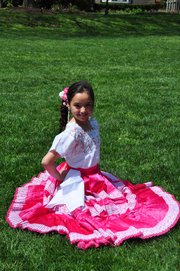 “We’ve always believed it’s important to allow our children a chance to express themselves,” Violeta Tablett said. “In Isabella’s case, part of expressing herself through dance includes doing it as much as possible.

“I promised myself I will do any competition there is, even ones where I can’t win because I’ve won before,” Isabella Tablett said. “I just like to compete and dance along with other people.”

Isabella said even before entering the competition she was used to explaining the traditions of Peruvian dance to people.

“My friends like to ask questions about the dresses I wear or the hairstyles that go with each dance, and they always ask why I dance barefoot,” she said. “Girls don’t wear shoes in Peruvian dance. A lot of the moves would be hard if I was wearing shoes, my feet wouldn’t be able to bend the right way.”

The National PTA Reflections winners will be announced in early May.