‘They Love Each Other with All Their Hearts’
Votes

‘They Love Each Other with All Their Hearts’

Chantilly High presents ‘You Can’t Take it With You.’

“People need to make sure that work doesn’t consume their lives so they end up with nothing at the end. And since the story takes place during the depression and financial crisis, it’s even more relevant today.”

Some of the leads of Chantilly High’s upcoming Cappies comedy, “You Can’t Take It with You.” 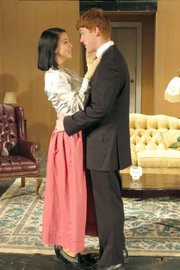 (From left) Stephanie Feeback (as Alice) and Matt Calvert (as Tony) in a tender moment from the play.

A funny and heartwarming story of an American family is portrayed in Chantilly High’s upcoming production of “You Can’t Take It with You.” It’s the school’s Cappies show and, said Director Ed Monk, “It’s double-cast because we have such a huge group of talented juniors and seniors.”

Rehearsing this comedy since February, the cast and crew of 45 will show the life of the eccentric Sycamore family in 1937 New York. The daughter falls in love with the son of a wealthy banker and hilarity ensues. “It’s the most-produced play in American history,” said Monk, and there’s a reason why.

“The writing’s so good and the characters are so funny, and that’s why this play’s been around for 75 years,” he said. “It also has an important message about priorities in life which still resonates. People need to make sure that work doesn’t consume their lives so they end up with nothing at the end. And since the story takes place during the depression and financial crisis, it’s even more relevant today.”

The costumes will also illustrate that time period. The students researched what people wore in the 1930s and then found and created all the outfits. So the women in the show wear mid-calf dresses, and the men wear suits, hats, pleated khakis and suspenders.

Senior Josh Lutz plays Ed, who marries into the Sycamore family and relies on the grandfather to support him. “Everybody in the family has a good time,” said Lutz. “Ed’s a quirky character who loves to play the xylophone. He has a printing press and prints anything he hears and likes. It’s challenging to not exaggerate his quirkiness, but playing the xylophone is always fun.”

Lutz and his fellow set designers began with concept drawings until they developed a design they all liked. They then built a model of it out of foam and the real thing out of wood for the stage. “It’s a 2D house, but the walls actually curve out,” he said. “There are two floors, several sets of stairs, a trap door and a big, stained-glass window above the front door.”

The lamps, tables and paintings are from the 1930s, and Lutz says the audience will like how odd the house is. “My favorite part of set design is taking a blank stage and filling it up with your imagination,” he said. “It’s really exciting to see it all come to fruition.”

Portraying Tony Kirby, with whom the Sycamores’ daughter Alice falls in love, is senior Matt Calvert. “He’s from a rich family and is upright and proper,” said Calvert. “He has good manners and is a genuinely kind and happy person.”

Kirby’s father owns a business on Wall Street but, although he’s vice president, he doesn’t like working there. “When he meets Alice there, falls in love and then meets her family, he seeks a new way of life,” said Calvert. “I like playing the nice guy and being the love interest — a simple, genuine character.”

Since Kirby’s really cute, said Calvert, “The audience will connect with him. They’ll love all the characters because it’s the best of both worlds. For example, the Sycamore family does all these weird, fun things, such as making fireworks in their basement. But they love each other with all their hearts. Tony’s family is lame and boring; he loves Alice’s family and learns that family is more important than money and business.”

Senior Matt Manalel plays Mr. De Pinna, the iceman. “He came to the Sycamore house one day to deliver ice and liked the family so much that he stayed for eight years,” said Manalel. “He helps Alice’s father, Paul, make fireworks.”

Manalel likes his character because “he’s got all these goofy lines, and he really loves the family and cares about their safety. He’s also awkward and makes himself uncomfortable, and I like playing Paul’s loyal, but slow, sidekick. The audience will like how close-knit the family is. Despite how wacky they are, they’re doing what they love and, in the long run, that’s what makes you happy.”

Playing the mother, Penny Sycamore, is senior Katie McVicar. “She’s nosy about Alice’s love life with Tony, but oblivious to what’s going on when she walks in on them,” said McVicar. “She often says embarrassing things, but doesn’t realize it. I enjoy playing her because she has funny dialogue, but she brings the family together because she loves and cares about everyone in the household so much.”

McVicar said Penny’s also writing plays, but not to sell — just because she finds it amusing. “I like playing a comedic role and hearing the audience laughing because of my different choices and the things I’m saying. We feed off their laughter and the cast’s energy comes way up.”

Offstage, she said, “All of us are such close friends that I think that comes to life through our characters onstage. The audience will like how each, individual character is in their own world, yet is part of one warm, loving family. It’s a really incredible play and the writing is brilliant.”