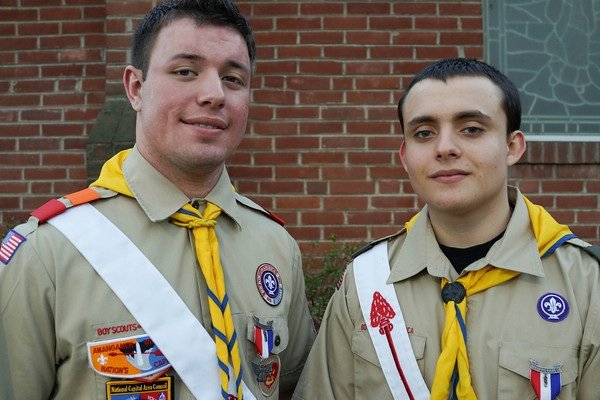 Cody Jones and Addison Speer, two new Eagle Scouts of Troop 673, sponsored by the United Methodist Men. The troop is over 50 years old and has produced over one hundred Eagle Scouts. Bill Blood

Cody Matthew Jones, son of Martin and Carol Jones, and Addison Speer, son of Harvey and Susan Speer, both of Great Falls, are the two newest Eagle Scouts of Troop 73, sponsored by the United Methodist Men.

Jones joined Troop 673 in 2006 after earning the Arrow of Light as a Cub Scout from Pack 673. Since joining the troop, he has served as patrol leader, quartermaster, troop guide, and senior patrol leader. His Eagle project involved designing and constructing an outdoor fellowship and picnic area at his church, Christ the King Lutheran Church in Great Falls. Working with church members, he designed the layout for the area, developed a plan for the leveling of the site, drainage, and construction of picnic tables. Jones, with friends and troop members, constructed tables, leveled the site, and landscaped the area. The fellowship area is now used regularly for Sunday school classes, church gatherings, and by the community for events such as the Fourth of July.

Speer joined Troop 673 in 2006 after earning the rank of Arrow of Light as a Cub Scout. Since joining the troop, he has served as patrol leader, assistant senior patrol leader, troop guide, and den chief for two years. Speer has attended summer camp five of the past six years and has participated in the Triple Crown of High Adventure trips: Sea Base in 2009, Philmont in 2011 and Northern Tier in 2012. He advanced to the level of Order of the Arrow, regarded as Scouting's National Honor Society, in 2009. His Eagle Project blocked off a section of overgrown and unusable trail in Riverbend Park, and created a replacement trail. Working with park staff, Speer developed a detailed plan to engage and manage separate groups of scouts in relocating plants, building the new trail, and blocking off the old trail. All of this was accomplished without damage to the delicate riparian ecosystem.

A junior at Langley High School, Addison is a member of the Theater Group. He is also an avid living historian and participates in reenactments of both the War Between the States and WW II. After high school, he plans to attend college or pursue a career in the United States Navy.