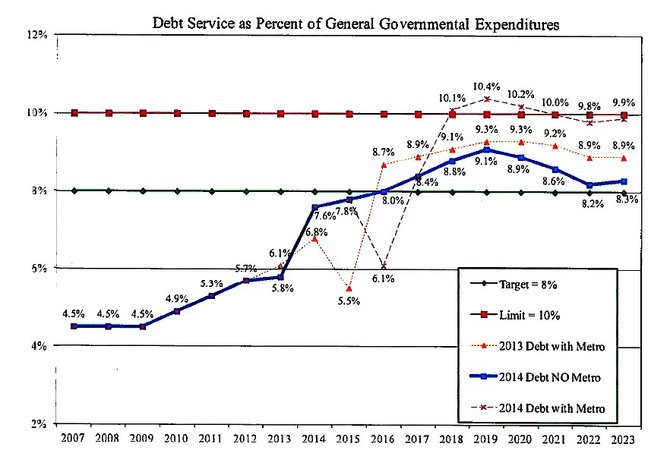 Alexandria is about to hit the roof, literally.

According to a new report by the Alexandria Budget and Fiscal Affairs Advisory Committee, the city is on track to exceed its debt ceiling — with or without the massive borrowing needed to finance the new Potomac Yard Metro. Even when taking the $194 million project off the books, the city still has a massive amount of uncertainty about everything from the waterfront plan and the Beauregard redevelopment to federal demands on the sewer system and regional plans for transit corridors.

"There's always some degree of uncertainty when dealing with anything in the future," said Deputy City Manager Mark Jinks. "The real issue with the debt isn't the amount of the debt, it's the fiscal impact of the debt service."

Members of the committee are raising red flags about the city's borrowing. In a strongly worded section outlining recommendations for the future, committee members caution that additional borrowing would "adversely impact" the city's bond rating and "significantly deteriorate the city's performance relative to its debt policy guidelines." Debt ratios have gradually inched upwards in recent years, leading to a situation in which Alexandria leaders are facing a future with an unprecedented level of debt.

SPENDING ITEMS that remain off the books include borrowing associated with the waterfront plan, the Beauregard redevelopment, potential federal mandates on upgrading the combined sewer system and the six new schools planned by Alexandria City Public Schools. That's a load of uncertainty for the city. Nevertheless, members of the committee are recommending that City Council members avoid raising debt policy targets and limits.

"I don't think the idea should be dismissed so lightly," said Councilman Tim Lovain, a former chairman of the Budget and Fiscal Affairs Advisory Committee. "It doesn't look right to have guidelines that are due to be exceeded without bothering the bond houses."

The report cautions that additional borrowing would "adversely impact" the city's bond rating, which currently receives the highest rating from two of the three New York City bond-rating agencies. The report comes at a time when City Council members are putting together changes to City Manager Rashad Young's proposed operating budget, which council members are currently considering. In the next few days, council members will be submitting potential additions and deletions that will be debated as the deadline closes in for fiscal year 2014.

"We need to increase the amount of current operating funding that is going to our capital budget," said Councilman Justin Wilson, a former member of the Budget and Fiscal Affairs Advisory Committee. "The more money we put in today and tomorrow and the day after, it's less money we need to borrow."

EVEN WHEN THE COST of building the Potomac Yard Metrorail station is removed from the calculation, Alexandria is on track to exceed debt policy benchmarks in two separate categories — debt as a percent of real property assessed value and debt as a percent of personal income. Members of the committee noted that this is the first time BFAAC has observed this trend, a phenomenon that city leaders say is no cause for alarm.

"To the degree at which that it's been exceeded in this current (capital improvement plan) is not a serious problem," said Jinks. "Now do we have challenges left that we are going to have to figure out how to care of? Absolutely right."

When the cost of the new Metro station is added to the books, the city will exceed debt policy benchmarks in all three categories for the first time. That means Alexandria is about to open the books on a new fiscal chapter. For now, members of BFAAC are raising some red flags for members of the City Council to consider during the upcoming budget deliberations.

"Their job is to be Cassandras on fiscal issues, and that's good," said Lovain. "They raise warning signs so that council is paying attention."