Town Employees Honored for Service to the Community
Votes

Town Employees Honored for Service to the Community 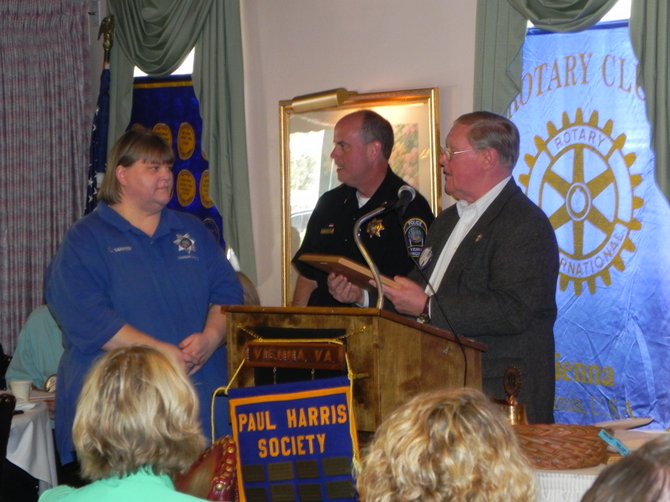 On April 24, three Town of Vienna employees received Rotary Club of Vienna’s 2013 “Service Above Self” award. Mark Sherwood, operations superintendent, and Jonathan Wooden, sanitation supervisor with the Department of Public Works, and Tammy Barker, dispatcher with the Vienna Police Department, received the awards for their dedication and service to the Vienna community.

Each year, the Rotary Club of Vienna honors one town employee, Police Department employee and Vienna Volunteer Fire Department member with this award. The award recognizes individuals within the town government who represent the club’s motto of “Service Above Self” and demonstrates the club’s four-way test.

This year’s award went to two town employees for their partnership in revamping the town’s refuse collection program last year and streamlining trash, recycling, bulk and brush pickup. The new program has resulted in a cleaner community and an easier collection schedule for residents. Both long-time employees with over 60 years of collective town service between them, Sherwood and Wooden dedicated numerous hours to working with the town council, staff and citizens to develop a comprehensive plan that would reduce cost and increase quality of service to town residents.

Tammy Barker, a dispatcher in the Vienna Police Department, was nominated due to her dedication to the job and the pride she takes in her work. She goes above and beyond her assigned duties by assisting the records section with data entry, thus allowing the division to tend to other duties. Barker is also an active member in her church and participated in a church mission to assist the community of Boise, Idaho for 18 months. In addition, she and her sister crocheted over 100 hats and scarves to be donated to needy children in the community, as well as donated over 100 Chemo Caps to a cancer hospital for children undergoing chemotherapy.

Since joining the VVFD in 2011, she has contributed over 700 hours to the organization and has taken on several major projects including the annual fund drive and the community outreach committee. Her efforts have resulted in an increased community presence for the department.

During the program, the Rotary Club of Vienna awarded the town’s Parks and Recreation Department with funds to support the town Summer Camp program and class scholarships, and awarded the Vienna Police Department with a donation to purchase ballistic vest covers and support the Rape Aggression Defense program. In addition, the Vienna Volunteer Fire Department received a donation in support of the new Pierce Velocity fire truck.