Wolverines in search of return trip to postseason. 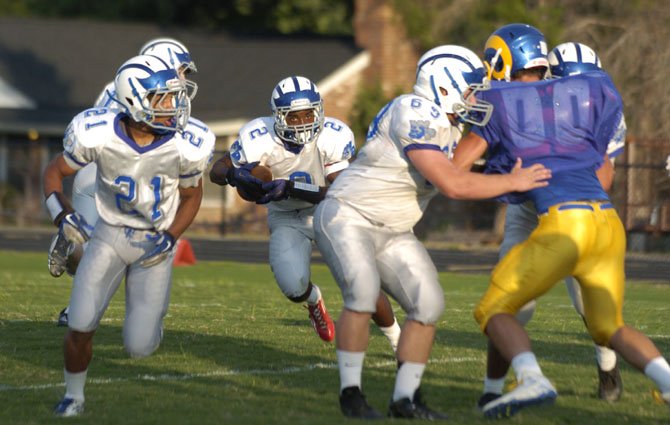 West Potomac senior DeMornay Pierson-El, with ball, is committed to the University of Nebraska. Photo by Craig Sterbutzel.

The West Potomac football team was nearing the end zone during a recent scrimmage against Robinson when Wolverines quarterback Preston Jones tipped an errant shotgun snap up in the air.

While the Wolverines had reason to panic, senior running back DeMornay Pierson-El showed he had everything under control.

Pierson-El transformed the potential stressor into six points, catching the botched snap and racing around the left side for a touchdown.

Pierson-El’s athleticism is a big reason why West Potomac made the playoffs in 2012. Now a senior, Pierson-El and the Wolverines will attempt to return to the postseason in Davis’ second season as head coach.

Pierson-El is committed to the University of Nebraska as a slot receiver and a kick/punt returner. Davis also plans to use Pierson-El in multiple positions.

Pierson-El has high expectations for his senior season.

While the Wolverines have a star, Davis pointed out Pierson-El will have some help this season. Senior running backs Josh Carter and Kevin Carter are cousins of Pierson-El and figure to lighten his load in the backfield.

“We’re not singular anymore,” Davis said. “This isn’t just give No. 5 the ball and watch him go.”

Jones enters his first season as a varsity starter at quarterback.

On defense, Harkless is a standout cornerback who said he is receiving interest from multiple colleges.

“Last year we were really senior heavy, so this year was sort of a rebuilding process,” Harkless said. “But we’ve come together so far. It’s only two weeks into the season and [our performance during tonight’s scrimmage against Robinson] explains how hard we’ve been working and paying attention.”

Davis described senior linebacker Darien Pickett as the “leader” of the defense.

Davis said he’s noticed the Wolverines are starting to do the “little things,” in regard to following directions and displaying good sportsmanship on the field.

“He’s been telling us … [to] keep our composure and be gentlemen out there,” Pierson-El said, “but [also] handle [our] business.”

The Wolverines will open the season at home at 7:30 p.m. on Thursday, Aug. 29 against Centreville. The teams played twice last season, with West Potomac winning the regular-season matchup and Centreville winning in the playoffs.