Performances Saturday, Dec. 21, and Sunday, Dec. 22, at the Waddell Theater on the Loudoun Campus of Northern Virginia Community College. 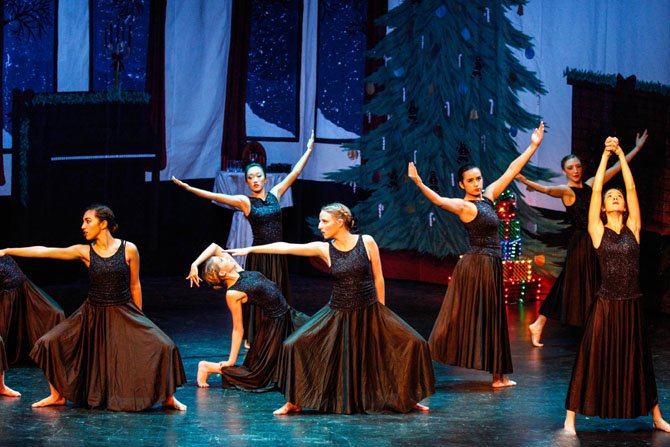 The first cast of the "Gingerbread Cookie" dance were the youngest dancers in the company when The School of Theatrical Dance [SOTD] in Great Falls first staged "Christmas Eve at the Nutcracker Club" in 2006. Now those dancers are in the Level 8 Ballet class that SOTD Director Theresa D"Alessandro says she created, "in response to their talent and technical accomplishment." When one of those dancers, Dylan Murphy of Great Falls, was a member of the Level 7 Ballet class a couple of years ago, she said, "The Winter Show is a great tradition. The show is a lot of fun. For the girls who have been dancing at The School of Theatrical Dance for a while, it is so much fun to watch the dances we did as younger dancers."

Another member of the Level 8 Ballet class who has grown up dancing with The School of Theatrical Dance is Great Falls resident Holly Lundeen. She described "Christmas Eve at The Nutcracker Club'" as "a twist on the classic tale of The Nutcracker. It is a tradition at our studio and I love it." Sara Warrington, also of Great Falls, was in Level 7 Ballet in middle school and thought it was exciting to finally be in dances that she had looked forward to for years. Warrington is now dancing in the Level 8 Ballet class and says that, "This year, instead of [the "Snow" dance], Ballet 8 is performing a more contemporary winter suite. I enjoy the piece because it's a nice change after being in Snow for two years." It is that combination of tradition and innovation that has kept generations of families and audiences coming back to The School of Theatrical Dance and "Christmas Eve at the Nutcracker Club."

The Waddell Theater is located on the Loudoun Campus of Northern Virginia Community College, Rt. 7, Sterling. Performances Sat. and Sun., Dec. 21 and 22 at 1 p.m. and Sat., Dec. 21 at 5 p.m. Reduced ticket prices for groups of 10, active military and veterans and family, children under 12 years of age and seniors. Complimentary admission for Special Olympics families and chaperones.