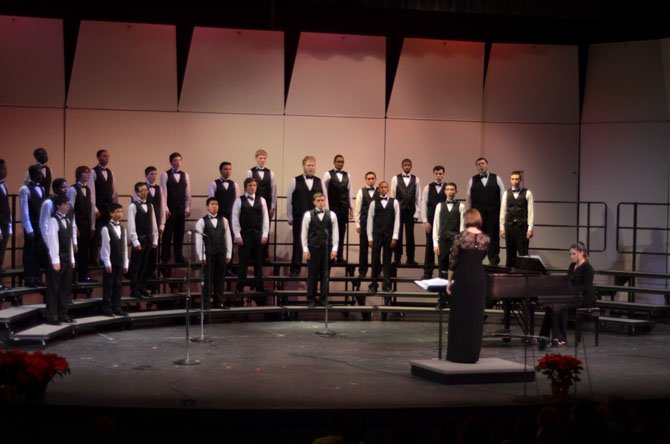 South Lakes High School Men’s Camerata was the first group to sing at the 2013 Winter Concert at the school’s Little Theatre on Dec. 19. Photo by Ryan Dunn

The Little Theatre in Reston’s South Lakes High School was packed the evening of Thursday, Dec. 19 as families and friends gathered to hear the music of the South Lakes Choral Department. Songs of the season, secular, religious and whimsical, were performed by the Women’s Chorale, Men’s Camerata, Chamber Singers and Bella Voce. Directing the singing ensembles was Choral Director Rita Gigliotti.

The concert began with a performances by the Men’s Camerata with songs including "Stars I Shall Find" and "You’re A Mean One, Mr. Grinch." This was followed by the DoReMigas, South Lakes Ladies A Capella Ensemble, which is run and directed by students Marika Ottman and Emily Hanbury. The South Lakes Men’s A Capella Ensemble, SMAC, then took the stage with a performance of "Wonderful Christmas Time." The student run group SMAC is run and directed by high school junior Harrison De Wolfe who has been singing with chorus groups since 5th grade.

Women’s Chorale sang next, followed by the group Bella Voce. Among the songs preformed by Bella Voce was a rendition of the Christmas carol "Gaudete."

"It will definitely be something a little different to your ears," said Gigliotti. Afterwards the Chamber Singers sang songs including "O Holy Night" and "Jingle Bells." The show concluded with the combined choirs singing "Happy X-Mas (War Is Over)."

Christian Amonson, a resident of Alexandria, and friend of Choral Director Gigliotti videotaped the show. "I’ve been working with Rita for four years," said Amonson. "I love being able to come to the high school shows… the kids have been practicing for six weeks and it is great to see a packed house." Robert Campbell, a grandfather to one of the singers also enjoyed the show. "I thought it was great, they did a fine production," said Campbell.

South Lakes Choral Department has been very active over the past several weeks with a performance held for the Reston Rotary Club and caroling events held four times at the Reston Town Center. The winter concert kicks off a three-month schedule of concerts, which includes: Jan. 24-25: Broadway Night, and Feb. 21-23: SingStrong: An A Cappella Music Festival to benefit the Alzheimer’s Association, which will feature the group, TEN, currently competing in NBC’s The Sing-Off.

Before the event concluded, Gigliotti spoke to the audience. "The next few months will be a bit of a whirlwind," said Gigliotti. "There are so many pieces that go into a concert. I am really thrilled to have so many parents that support us…"

To learn more about the South Lakes Choral Department, visisouthlakeschorus.org.