Community Sounds off On School Discipline 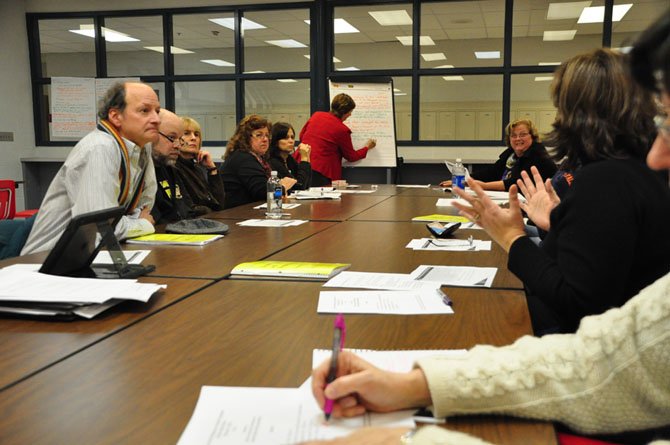 Dozens of administrators, teachers, parents and community members gathered at McLean High School Thursday, Feb. 7, to share their feedback on the Fairfax County Public Schools Students Rights and Responsibilities manual. The county is in the process of trying to simplify the document’s language, “substantially” reduce its size and match policies more closely with the community’s wishes.

“We want to know: what are the good points, what are the bad points with the FCPS process? What’s working well? What needs to be improved upon?” said Steve Stuban, chairman of the committee.

Stuban lost his son Nick to suicide in the aftermath of the disciplinary process several years ago, an event which spurred the county to start thinking about re-imagining the process.

A 40-member committee was approved in June of last year by the school board, which holds weekly meetings to examine about 75 issues they came up with in the school system’s policy.

It consists of representatives from schools around the county, and it meets weekly to work on the process. They have come up with several working points for the community to address, which is what the McLean High School meeting addressed.

THE MCLEAN HIGH MEETING was one of several around the community to gather stakeholders together to break down issues piece by piece, all while giving the county feedback on the policies.

“We like to break people down in working groups, and it’s a productive process,” Stuban said. “We’ve seen that people come into these meetings with their own thoughts about what things should look like, but by the end of the night, they’ve heard from others and gained insight to other points of view.”

The tone of the document, which many thought was too harsh, was a big sticking point of the community.

“I think it comes across as very negative, like it’s a big list of warnings and threats,” said Kathleen Murphy, a community member who attended the meeting. “I’d like to make it more than just a list of transgressions and penalties.”

The document lays out the punishment for possession of alcohol, a minimum of five-day suspension, and marijuana, which is a 10-day suspension and recommendation for expulsion.

Several people in the group felt that the penalties were outdated.

“I’d like to see alcohol and marijuana possession treated a little bit more progressively in the school system. To someone in our schools, they’re both illegal, so maybe the penalty for a first time violation should be the same, and then get more progressively severe for repeat offenses,” said Matthew Ragone, principal of Langley High School. “I think many of the penalties we have are very well thought out, but these two substances seem to be more static compared with the way things are now.”

Westfield High School Principal Tim Thomas said he would like to see a more thorough records review for offenders.

“I’d like to see us differentiate more between a first time offender and someone for whom this is a habitual behavior,” he said.

Thomas also said he would like to see the document itself be a little less cumbersome.

“I’d like to see it condensed so it can be more easily digested and gone over with students,” he said. “The easier something like this is to comprehend, the better.”

PARENTS WERE CONCERNED about the notification process when something happens, while principals mentioned a need to speak to students immediately in some cases, such as when a weapon might be present or there are large numbers of students involved.

“I understand where the principals are coming from when they might need to find out who has a weapon right away, or if there was a fight involving students and it’s hard to get a hold of 20 sets of parents before interviewing them,” said Jan Smith, parent of a high schooler in the county. “But speaking personally as someone that knows my son, it makes me feel a little uncomfortable that he could be caught up in something and then questioned in a way that could have major consequences without me or my husband being present.”

More information on the committee can be found at

http://www.fcps.edu/dss/ips/srr/committee/index.shtml and comments about the Rights and Responsibilities document can be submitted to community_dialogues@fcps.edu.