Officer of the Year
Votes

Officer of the Year 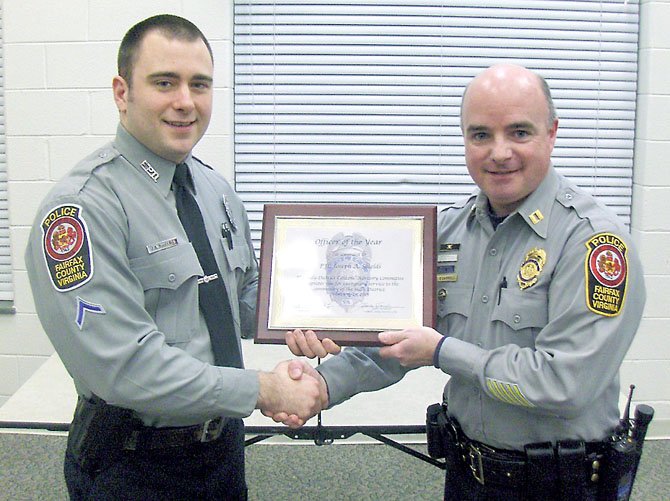 PFC Joe Shields (on left) is congratulated by police Capt. Ed O’Carroll for being the Sully District Station’s 2012 Officer of the Year. Photo by Bonnie Hobbs.

It takes a great deal to become a police station’s Officer of the Year, but PFC Joe Shields has what it takes. And last Wednesday, Feb. 13, he received that honor for 2012 during a meeting of the Sully District Station’s Citizens Advisory Committee.

“He’s been a midnight-patrol officer for seven years and our top producer on DWI arrests,” said Capt. Ed O’Carroll, the station commander. “He follows up on calls for service and is dedicated to the cause.”

Then, addressing Shields directly, O’Carroll said, “You’re an example to all of us at the station. Thank you for all your hard work. It’s an honor to award you Officer of the Year.” O’Carroll then presented him with a framed certificate, movie tickets and a certificate for a stay at the Westfields Marriott.

Shields was nominated by 2nd Lt. Matthew Doyle, who explained why in a letter to O’Carroll. All throughout last year, wrote Doyle, Shields “exemplified the term, ‘outstanding police officer.’ [He] made above- average criminal and traffic arrests, driving-while-intoxicated arrests, conducted several extensive criminal investigations, and handled countless calls for service in a diligent and professional manner.”

Doyle said Shields took great pride in proactively patrolling the Sully Police District searching for suspicious people and activity, as illustrated by his “self-initiated field contacts which were twice that of the squad’s average during the year. [And] when it came to detecting and apprehending serious criminals, Shields made nearly four times the amount of felony arrests as his peers.” In addition, wrote Doyle, during 2012, Shields also handled 50 percent more incident reports than his fellow squad members.

Doyle said Shields exemplified what a well-rounded and exemplary police officer should be. Shields handled numerous incidents throughout the year, but Doyle said three felony cases were especially noteworthy.

Last summer, Shields stopped a vehicle for speeding. But during the seemingly routine traffic stop, he began to suspect there was more to the violation than someone running late and exceeding the speed limit. So he engaged the vehicle’s occupants in conversation and noticed several inconsistencies in the driver’s and passenger’s stories.

“Shields noted both occupants appeared extremely nervous and got that gut feeling [that they] were hiding something,” wrote Doyle. “[He] followed his training and experience and requested the assistance of a drug-detecting police dog. The K-9 handler and his four-legged partner arrived on the scene with the dog alerting to the presence of illegal drugs contained within the vehicle.”

A search of the vehicle revealed a sizable quantity of cocaine, morphine pills, heroin, and drug paraphernalia. “Besides the new narcotics violations, Shields learned the driver and passenger both had active warrants for other serious crimes,” wrote Doyle. “Shields turned an everyday speeding violation into six felony charges and numerous misdemeanor charges.”

In another case, Shields responded to a report of shots fired inside a home occupied by several people. He was the first to arrive and assess the situation, remaining calm and professional while developing an immediate plan of action and guiding other responding officers.

“He was instrumental in assembling a plan resulting in the subject surrendering and all occupants of the home being safe,” wrote Doyle. “Shields [then] utilized his excellent, interpersonal communication skills [to obtain] a full confession from the suspect, netting three serious felony charges.”

In the later part of 2012, Shields responded to a routine call about suspicious people in a backyard. Using his skills and training, he developed a stealth approach to the area, instead of simply driving through it. He also parked his cruiser away from that yard and walked through the neighborhood in search of people “who were utilizing the cover of darkness to possibly prey upon innocent citizens,” wrote Doyle.

“While making his way through the poorly lit neighborhood, Shields was able to locate the suspicious persons without [their knowing it],” continued Doyle. “Shields’s persistence and patience yielded positive results with the apprehension of subjects who were involved in a rash of crimes throughout the neighborhood, including breaking into cars and taking valuables.”

Doyle also noted that Shields often instructs younger officers in police procedure and protocol and is “a leader among his peers. He is respected by his co-workers and is a highly dedicated and well-rounded individual who displays the highest work ethic as a police officer. In recognition of his hard work, dedication and diligence to duty throughout 2012, I am honored to nominate PFC Joseph A. Shields for the [Sully District Station] Citizens Advisory Committee Officer of the Year.”