McLean Project for the Arts’ only surviving founder, Nancy Bradley, shares stories of its origin. 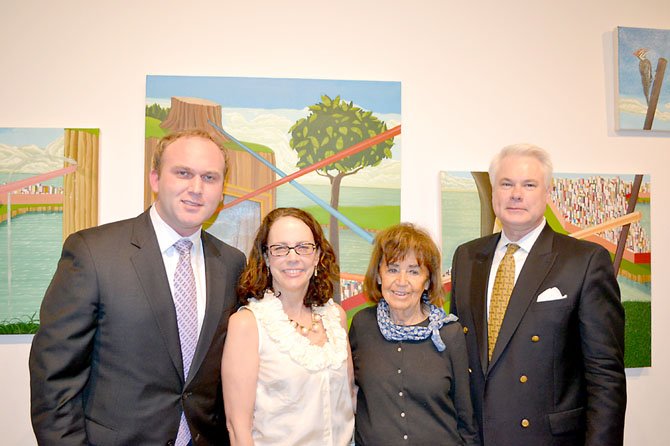 Fifty years ago, long-time resident Nancy Weyl Bradley, along with five local artists, made a decision that would permanently change the cultural landscape of McLean. 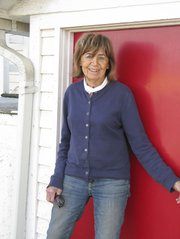 MPA founder, Nancy Bradley, stands before the entrance to the MPA’s original location on Emerson Avenue.

They noticed a lack of opportunity for artists and those who appreciate art in the community. And it wasn’t long before the group of six women artists, most of whom were studying at American University, came up with the idea of opening an art gallery in McLean. It was not intended to be a vanity gallery to show their own works, but a true gallery to showcase the works of local artists.

“We said all six of us could put in $300 and we could rent a space for a few months,” said Bradley, “and see if we can invite other artists to come show there.” Bradley, the only surviving founder of the McLean Project for the Arts, shared stories about the 50-year history of the MPA at its Emerson Gallery last Tuesday evening. The symposium was sponsored by the McLean Historical Society.

The group originally rented a space in the basement of what is now the Salona Village Shopping Center for $75 per month.

THEY CHARGED artists $100 per month to show their paintings. They made just enough profit to send out invitations. The six ladies painted walls, swept the floors, hung paintings, did whatever was needed to run a gallery. Soon they began offering memberships for $5 per year. Bradley recalls having about 60 memberships that year.

Eventually they moved into the basement of what is now the McLean Arts Center on Emerson Avenue. They painted the back basement entrance red, and the newsletter for what became the Emerson Gallery was named Letters from the Underground. They had successful fundraisers, but they also had some months that they couldn’t make the $100 rent. On those short months, Bradley said, they would take turns hosting luncheons, inviting 10 guests at $10 each.

“We had a good many years just sort of going on the fringes of quitting,” Bradley said. “Then suddenly it seemed to take off.” Gerry Brock, the Gallery’s first Executive Director, is often mentioned as the force behind the early years of the gallery’s successful fundraising.

After several more moves, it was decided that the Emerson Gallery needed a permanent home. Good fortune and a fair bit of negotiating led them to the McLean Community Center, which was willing to let them use what it called the community hall. It featured a dropped steel beam ceiling and a disco ball. Local kids used it for roller-skating.

Eventually the community hall moved to a downstairs wing. The McLean Project for the Arts, as it is now called, ran a major fundraising campaign and was able to renovate the upstairs space, which included the Emerson Gallery, as well as the Atrium Gallery and the Ramp Gallery.

“It’s incredibly gratifying to see a small group of women artists, what they founded 50 years ago and what we’ve become today,” said the MPA’s Executive Director, Nancy Perry. “From sweeping floors and hanging art wherever they could find space in downtown McLean, to now this fabulous 2,000 sq. ft. white box exhibition space. The Emerson Gallery is the pride of the region. There’s no other space like it.”

This organization that moved 10 times before finding its now permanent home, which operated with an all-volunteer staff for its first 25 years is now highly respected in the regional art community. “We’ve really established ourselves as one of the premier exhibition spaces for contemporary artists,” said Perry. “We’re the oldest continually operating nonprofit visual arts center in the region,” she added.

THE MPA is still asked about its model, and the secret to its success. The group credits its original mission. Bradley said that though the mission was to bring art to this community, and to help discover “young emerging artists,” it was also to do something for the children of the community. In 1962, when the MPA was founded, there was no art program in the public schools. Reaching out to schoolchildren has been a part of the MPA’s mission since its inception. The MPA was the first visual arts center in northern Virginia to target at-risk youth and to offer these students free bus transportation to the gallery, according to Perry.

The MPA has been a thriving entity for 50 years, highlighting works of emerging and established contemporary artists from the mid-Atlantic region, supporting programs for school children, and sponsoring a variety of classes and open studio opportunities in its Susan B. DuVal studio. It has shown works by more than 1,500 artists in its 50 years, including works by artists such as Sam Gilliam, member of the famed Washington Color School. In addition, the MPA may be most well known locally for hosting one of McLean’s most popular events, the annual MPA Artfest.