State Senator Chap Petersen wants you to curb your enthusiasm.

Politics makes strange bedfellows, and sometimes estranged ones as well.

Republican Governor Robert McDonnell, who received credit for hammering out the “compromise” legislation, declared passage of the bill “a historic day in Virginia.

“There is a 'Virginia Way' of cooperation and problem solving, and we saw it work again today in Richmond,” McDonnell said in a statement Saturday.

The proposal, financed largely by higher sales and car taxes, is projected to raise more than $3.5 billion for roads and rails over five years and nearly $900 million annually after 2018. Northern Virginia would get hundreds of millions from the state, including $300 million committed to complete Metro’s Silver Line extension to Dulles International Airport. 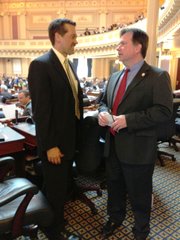 Del. Tim Hugo (R-40) discusses an upcoming bill on the House floor of the Capitol in Richmond on Monday, Feb. 18.

Many local leaders—Republicans and Democrats alike—applauded the package as a “win” for Northern Virginia.

Supervisor John Cook (R-Braddock) said he was “thrilled” at the additional funding for Northern Virginia.

“Money in this bill will also help finish the Dulles Rail project, alleviate congested roads and ensure existing infrastructure is properly maintained,” Cook said. He added that he’s spoken with numerous voters in town halls and neighborhood meetings, and one of the top concerns has been the deteriorating condition of Fairfax County’s roads and increased congestion.

“With this bill, we're one step closer to significant improvement in these areas,” he said.

SHARON BULOVA, the Democratic chairman of the Fairfax County Board of Supervisors, said the bill was a “great step toward addressing the transportation challenges we face in Fairfax County and the Northern Virginia region.”

Bulova was instrumental in creating the Urban Crescent Coalition—a group of 54 mayors and county chairs of the state’s 46 most populous regions stretching from Northern Virginia to Richmond and Hampton Roads. For months, the coalition has been lobbying top commonwealth leaders to adequately fund Virginia’s “crumbling” transportation system. 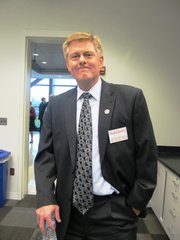 Braddock Supervisor John Cook, a Republican, supported the governor’s transportation bill as well as colleague Sharon Bulova, chairman of the Fairfax County Board of Supervisors.

Bulova said she was “especially pleased with the commitment of $300 million for the Silver Line “which will help to keep tolls in the Dulles Toll Road affordable for Northern Virginia motorists.”

Both Cook and Bulova applauded the bipartisan efforts of Governor McDonnell, Sen. Janet Howell (D- 32), Del. David Albo (R-42) and Del. Vivian Watts (D-39) for reaching agreement on a funding strategy that “moves us in the right direction,” Bulova said.

But State Senator Chap Petersen (D-34) put the brakes on the cross-party celebrating. In a series of scathing comments and posts on his blog OxRoadSouth, Petersen called the bill “the train wreck that was the final compromise on HB 2313,” and said it may be unconstitutional as well.

The bill provides new revenues for transportation through increased taxes and user fees that, in many cases, are higher for taxpayers in Northern Virginia than other parts of the state. For example, under the new bill, the sales tax rises from 5 to 6 percent only in Northern Virginia and Hampton Roads, and to 5.3 percent everywhere else in the state.

Petersen said that’s not enough to turn a bad bill into a better deal.

He described the final deal as “a grotesque combination of tax cuts, tax rebates, tax increases, new taxes, old taxes which are phased out (and then reappear elsewhere), regional alliances … special projects, and exceptions to all of the above.”

He asked his Republican colleagues: “Did you have to rewrite the entire code book, so you could use the fake ‘but we’re cutting taxes too!’ line on gullible voters?”

He conceded the bill will raise millions for transit, including new support for Rail to Dulles, which is “critical” for the region.

And for many commuters in Northern Virginia, that may be enough reason to embrace a long-awaited transportation-funding package.

“This bi-partisan compromise is far from perfect, but it was supported overwhelmingly by the business community and weary commuters,” said former state delegate Margaret Vanderhye, a Democrat from the 34th district who was narrowly defeated in her 2009 reelection bid by Republican Barbara Comstock. “It contains $300 million for Dulles Rail and a funding mechanism to allow our region to raise funds that stay here for our transportation priorities—something we tried and failed to accomplish with the 2002 referendum.”

Vanderhye said she was “outraged” that some Northern Virginia legislators would vote “no” solely based on their pledge to Americans for Tax Reform, the organization created by anti-tax crusader Grover Norquist. In the Taxpayer Protection Pledge, candidates and incumbents solemnly bind themselves to oppose any and all tax increases, and the ATR has the role of promoting and monitoring the pledge. 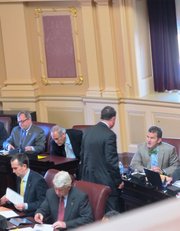 Sen. Chap Petersen confers on the Senate floor with a colleague in Richmond on Monday, Feb. 18. Sen. Dave Marsden (D-37) is sitting to Petersen’s right.

Since its rollout with the endorsement of President Reagan in 1986, the pledge has become de rigeur for Republicans seeking office.

Like most Democrats, Petersen staunchly opposes the ATR and its pledge. “The only pledge I will take is to my wife,” Petersen has said.

But his “no” vote on the transportation package puts him the same camp as Republican Del. Tim Hugo (R-40), who did not vote in favor of the governor’s bill “as I do not believe that it is the right vehicle to address Virginia's transportation needs. Now is not the time to increase taxes on Virginia's hard-working families. While I disagree with the bill's approach, I appreciate my colleagues' efforts to solve our transportation needs,” Hugo said.

AMERICANS FOR TAX REFORM applauded Hugo and 18 other Virginia lawmakers—including Comstock, Scott Lingamfelter (R-31), Robert G. Marshall (R-13) and David Ramadan (R-87) for “standing firm” against “a $6.1 billion tax increase. … These lawmakers serve as an example of what legislative leadership looks like,” the ATR said in a statement released Saturday.

Petersen said he’s unfazed by any false comparisons to those in the ATR camp, and stands by his opposition to the bill based on what he calls the bill’s “lack of vision,” the inequities to Northern Virginians and what he believes is the bill’s ultimate failure to solve the state’s transportation problems. Del. Scott Surovell and Sen. Adam Ebbins were the only other Northern Virginia Democrats to vote against the bill.

“The method for raising these funds is complicated, contradictory and will eventually create ‘two Virginias’—with differing tax rates and, ultimately, differing levels of support from Richmond,” Petersen said.

Petersen contends that any sustainable transportation funding solution should be “simple, uniform and equitable. It should stick to the historic premise that ‘the user pays’ for our highways. It should treat all taxpayers equally.”

“I’ve been told that my opposition to this plan may result in the demise of my political career. If so, I can only state, at least there’s some benefit,” Petersen quipped.