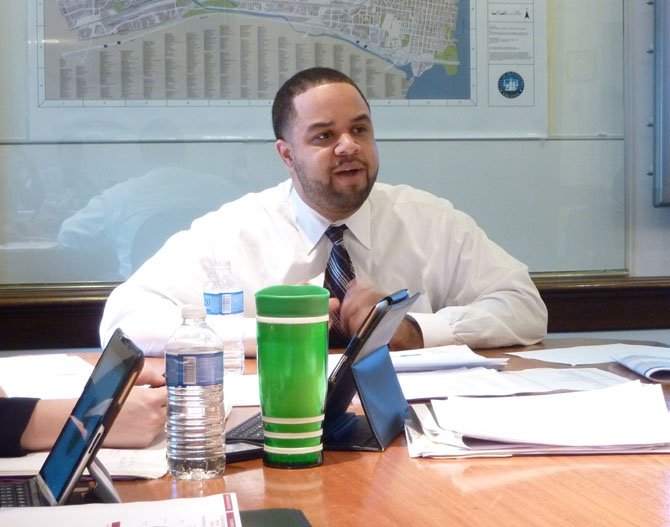 An increase in property taxes along with cuts in services to Alexandria residents are part of the $626.6 million General Fund Operating Budget proposed Feb. 26 by City Manager Rashad Young for fiscal year 2014.

“We are starting with a budget shortfall of $31 million,” Young said during a media briefing at City Hall. “This is about a balanced approach and a shared sacrifice. Every stakeholder group shares the pain in this.”

The budget reflects Young's recommended real estate property tax increase of 2.5 cents; and an additional 3 cents in accordance with the City Council guidance to provide additional revenues to support an increase in capital investments.

Also under Young's proposal, parking fees will increase by 25 percent at the eight city-owned parking garages while parking meter hours will be extended by two hours to 9 p.m.

“This is about a balanced approach and a shared sacrifice. Every stakeholder group shares the pain in this.”

City expenditures would be reduced by $13.8 million in the proposed budget in addition to other cost savings that include closing Warwick Pool, reducing by two hours per week the operating hours of Duncan, Burke and Barrett libraries, and the elimination of 14 positions within the city government.

Residential real property and commercial property taxes combine for 57.7 percent of the city's revenue with other local taxes such as restaurants and lodging adding an additional 27 percent.

Young noted that the city is facing its sixth straight year of economic challenges as the cost of current services and previous commitments exceeds revenue growth.

“We evaluated over 200 recommendations over the last three months,” Young said. “There was no good way to address the challenges we have so that someone is spared.”

The proposed budget cancels the implementation of the Arlandria/Del Ray Trolley, which would save $700,000 in costs for the city, while allocating $600,000 to expand the Capital Bikeshare program.

The Operating Budget and Capital Improvement Program are scheduled for adoption by the Alexandria City Council on May 6 at 7 p.m. Information about the public budget presentation and public meetings, the proposed budget and online comments can be found at alexandriava.gov/Budget.