Majors claim sole possession of first place in the district. 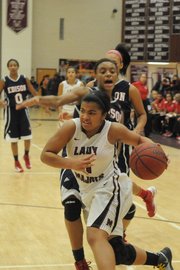 Mount Vernon senior Taylor Dunham scored 12 of her 14 points against Edison in the third quarter on Jan 4.

Mount Vernon’s six first-half 3-pointers produced a four-point halftime lead, but it was Taylor Dunham’s work inside the arc that helped the Majors pull away in the second half.

Dunham scored 12 of her 14 points in the third quarter as the Majors built a 19-point second-half lead and held on for a 53-45 victory on Jan. 4 at Mount Vernon High School. Dunham attacked the basket, made jump shots and knocked down a pair of free throws in the third quarter en route to a 14-point night.

Dunham, who went scoreless in the first half, said she didn’t get discouraged.

“[In] the first half, my shot was off, but I didn’t let it really get to me,” said Dunham, a senior point guard. “When I was younger, I would have let it get to me. I probably wouldn’t have shot the ball. But I just kept my head up and they started falling so I just kept shooting.”

Both teams entered the game ranked in the top 10 of the Washington Post’s top 20. Mount Vernon, ranked No. 7, suffered its first loss of the season on Dec. 21, a two-point, double-overtime loss to Maury (Norfolk), and hadn’t played since Dec. 22. Edison, ranked No. 9, was undefeated and recently won the Lady Crusaders Holiday Tournament at Riverdale Baptist.

Neither team started well offensively as Mount Vernon led 21-17 at halftime. The Majors outscored the Eagles 18-8 in the third quarter and led by as many as 19 points in the fourth, when a basket by Tiffany Webster gave Mount Vernon a 49-30 lead with 3:25 remaining. Edison closed the game on a 15-4 run to close the gap.

“[In] the first half, my shot was off, but I didn’t let it really get to me. When I was younger, I would have let it get to me. I probably wouldn’t have shot the ball. But I just kept my head up and they started falling so I just kept shooting.”

Mount Vernon head coach Courtney Coffer was pleased to win, but wasn’t happy with the way the Majors performed.

“We felt that we were prepared,” Coffer said. “My disappointment with the kids is we gave them scouting reports and told them exactly what every single [Edison] kid wants to do and they failed to defend them the way that we practiced. I don’t know if that’s because we haven’t had a game in a long time.

“Me, personally, I feel that now that we’re starting to get some credibility, now that people have started believing we’re a good team and a good program, [the Majors] don’t realize that now the target is on our back and we’re no longer hunting, people are hunting us.”

Dunham said the Majors might have been resting on their laurels.

“We need to be more hungry,” she said. “I feel like we might have lost our hunger a little bit since we’ve been getting so much praise. It’s kind of an eye-opener tonight. I think it’s kind of a good thing that we had this game now rather than February. It will make us better at the end of the day.”

Kelly Loftus also scored 14 points for Mount Vernon. Chanel Shannon made a trio of 3-pointers and finished with nine points.

“If we can keep Chanel Shannon playing at the level she’s playing at,” Coffer said, “this team is going to be scary.”

The two teams will meet again on Jan. 30 at Edison.

“That stage was a little intimidating for some of our freshmen,” Lewis said. “That was probably one of the bigger crowds that we’ve had.”