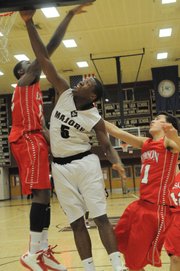 Mount Vernon — After Friday’s home game against Edison, Mount Vernon forward Anton Lucas said the Majors had something to prove after losing in the championship game of their holiday tournament on Dec. 29.

They wasted little time in doing so.

Mount Vernon jumped out to a 17-2 lead against Edison and cruised to an 84-50 victory on Jan. 4 at Mount Vernon High School. The Majors led by 20 at halftime and by 30 at the end of the third quarter. It was a dominant effort against an Edison program that reached the state tournament last season.

“By far the most complete game [we’ve played],” Mount Vernon assistant coach Lou Golden said. “This whole year, I don’t think we’ve started the game well, so by far this is the best start we’ve had this year — just a complete game, all and all. Normally, there’s some quarter where we just fall off, but we just didn’t have that quarter [tonight].”

“I think this shows what type of team we could become,” Lucas said. “If we keep this going, no one can stop us.”

Each team scored once before Mount Vernon ripped off 15 straight points in the opening quarter. Washington’s 3-pointer with 3:45 remaining in the period gave the Majors a 17-2 advantage. After Edison scored, Mount Vernon extended its lead to 23-4 with two buckets by Lucas and one by Decardi-Nelson.

“I think this shows what type of team we could become. If we keep this going, no one can stop us.”

“We came out hyped,” Lovitt said. “We got hyped in the locker room. We were defending our house.”