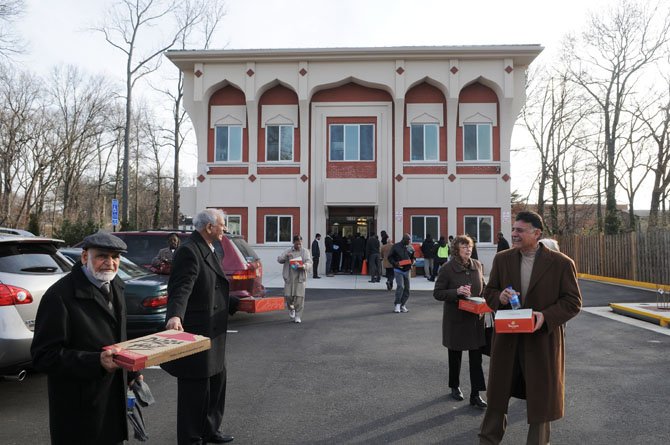 Declaring peace and spiritual brotherhood between Muslims and Christians, a host of Muslim-American religious dignitaries inaugurated the new Mount Vernon-area mosque at a ceremony attended by many Christians Saturday afternoon, Jan. 5.

“Let us work together for a peaceful, wonderful world in spite of those who’d want to pull us apart,” the mosque’s new spiritual leader, Imam Abdul Rahman Kahn, told the gathering. They numbered about a hundred and were seated on white folding chairs arranged in rows on a plush prayer rug of arabesque design, about 35-foot square.

The mosque, a two-story structure with five tall Islamic arches that each come to point, is located on Woodlawn Trail in Hybla Valley, just off Route 1 close to Firestone.

Attending were representatives of three area Christian churches — Aldersgate United Methodist, Good Shepherd Catholic and St. Luke’s Episcopal — which together offered the Muslims space to meet for Friday prayers while their mosque was being built. Attending also were representatives of Mount Vernon-area nonprofits that the Muslims currently assist in helping the poor — New Hope Housing, United Community Ministries and Progreso.

Plaques of appreciation were presented to the Rev. Dr. Dennis Perry and the Rev. Jason Micheli of Aldersgate, Father Tom Ferguson of Good Shepherd and the Rev. Tuck Bowerfind of St. Luke's. Del. Scott Surovell presented a General Assembly proclamation to ICNA and the mosque.

The delegate applauded the mosque as “a great addition to our community” and spoke of his Jewish background and his sensitivity to welcoming religious minorities.

The Muslims praised the courage and Christianity of Perry who with the aid of Micheli weathered a storm of criticism after a Fox News segment inflamed some Aldersgate members against offering space for the Muslims to pray. Bowerfind was thanked not only for his Christian hospitality but also for encouraging the Muslims to become involved in community betterment projects organized by Virginians Organized for Interfaith Community Engagement (VOICE) and Ventures in Community (VIC).

Associate St. Luke’s rector the Rev. Ketlen Solak said there was no opposition to welcoming the Muslims at her church. Ferguson said the reaction of Good Shepherd Catholics to the visiting Muslims was “overwhelmingly positive.”

Attending also were Pam Mitchell, executive director of New Hope Housing; Shirley Marshall, executive director of UCM and the Rev. Kate Walker of Mount Vernon Unitarian Church. As a courtesy to their Muslim hosts, they wore headscarves in the sanctuary. Headscarves, however, were not required and some Christian women did not wear them. Quakers from the Woodlawn Society of Friends were also in attendance.

Sherry Edelcamp, manager of the Ventures in Community Hypothermia Outreach Program at Rising Hope United Methodist Mission Church, said she is particularly thankful for Muslim volunteers who staffed overnight positions Christmas Eve and Christmas Day so her Christian volunteers could be home with their families.

Naeem Baig, ICNA vice president, said that the $1 million mosque building project was financed totally by local donations and that no foreign governments or organizations contributed.

Ramez Abdelgader of the ICNA Young Women said that her family, like many other Muslim-American families, came to this country to escape war-torn homelands in the hope of a better home and education opportunities while still maintaining their Muslim faith.

“We are all agencies that serve God by serving the community,” said Sheikh El-Sayyed, imam of the Falls Church mosque. “We are all members of one family.” He pointed out Mohammed’s honoring of Jesus and John the Baptist in the Koran, the importance of loving God and neighbors, the duty of providing for widows and the poor, and the commonality of Christian-Muslim angels.

“God knows we need their help to get things done here,” said Surovell, welcoming the Muslims and their mosque to Mount Vernon.